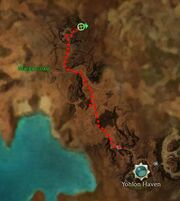 "<name>! Thank the Five Gods you made it out alive! So few of us survived! Ahtok was killed in the assault, and Rojis, Koss, and Kormir are all missing and presumed dead. Nerashi got away with Lonai, but Lonai's nerves have been shattered. We must keep a low profile. Kournan troops are hunting for us everywhere!"

Player response: "Wait a minute. What happened to Koss?"

"After the demons attacked, he retreated from the city. The last anyone saw him, he was holding off a horde Kournan guards to give Nerashi time to escape! You won't be able to adventure with Koss again unless we find him!"

Player response: "This is horrible! What's our plan?"

"We can't use Yohlon Haven as a rally point; there are just too many Kournan patrols around. Nerashi headed north to scout other locations. Maybe you could check with Zudash Dejarin. He's a cranky, old merchant, and has no love for the Sunspears. But he may know a safe place to hide. I'll stay here and send any other Sunspears along."

"Our assault on Gandara was thwarted by Varesh Ossa and that demon army she somehow conjured. But, all is not lost. We are regrouping. First, we must establish a base of operations here in Kourna. So, pull yourself together. You can't afford to grieve over the loss of Koss and the others yet. There will be time for that later. The sunspears need your leadership now.

Zudash Dejarin, a local merchant, may know a suitable place we can use as a command post. Can you consult with him while I tend to the other survivors?"

Accept: "Koss would want us to kick Varesh's butt for him. Yeah!"
Reject: "I'm going to hide under a rock for now."
When asked about quest: n/a

"Sunspears, eh? I heard about your debacle at Gandara. Varesh smashed your forces pretty good, and now you're scattered throughout Kourna. Poor, idealistic fools! You bring nothing but misfortune to all around you.

It would be best for us all if you were elsewhere. Let me think. I have an old comrade, Elder Jonah, who may be able to help you. He's in Ronjok. Go be his headache!"

"So you are the Sunspears who challenged Varesh? I'm not surprised Zudah [sic] fobbed you off on me. He's been bitter about Sunspears for years. But I'm afraid you cannot stay here, either. I put my village at risk simply by talking to you. Unless... Yes. I think I know the perfect place. There are some caverns behind the village. They were part of a temple complex once and flowed with sweet water, but they've since become overrun with vile creatures. Cleanse that place of its current inhabitants, and it will serve as a sanctuary for your group. Talk to Guardsman Bahsi. He will direct you on your way."

"Tread carefully. As Elder Jonah always says, we have more to lose than our hides if we don't do what is right."

Melonni: "Praise Melandru! The purity of the water is restored!"
<party leader>: "And with it we gain a base of operations."
Tahlkora: "A place to rest."
Dunkoro: "A place to plan."
Melonni: "A place from which to strike back against Varesh!"

Bayel: "General Morgahn."
Morgahn: "General Bayel. How goes the search for survivors?"
Bayel: "Those traitorous Sunspear dogs are scattered across Kourna! We are picking them off one by one!"
Morgahn: "Do you need any reinforcements from Jahai?"
Bayel: "Reinforcements? They are broken. No threat at all."
Morgahn: "No threat? I have always found the Sunspears to be very resourceful."
Bayel: "Don't worry, General. They have no place to hide, unless the ground itself swallows them up!"

"This place isn't a palace, but at least we're safely hidden from Varesh's forces. We've set up a Command Post in the northern end where you can confer with your allies. With all of the events of the past few days, Kormir missing, and now being hunted by the Kournans, we'll need a strong new leader to guide us. It is only natural that you've ascended to this position. We must tend to the wounded now, but I've heard Nerashi has returned with word of Koss's fate. So much to do..."

After talking to Zudash Dejarin, head to Marga Coast and follow the quest marker to the village of Ronjok, Melonni's birthplace. There, talk to Elder Jonah, who will direct you to Guardsman Bahsi. Guardsman Bahsi will offer a dialogue option that will teleport you to an explorable version of the Sunspear Sanctuary where you must defeat 5 groups of insects. They are easy to defeat for most groups, although be wary of the group that contains the boss Eshau Longspear. Although, that group has no Veldt Beetle Queen to heal its members, so it should be an easy win like the others. There are also several Bladed Veldt Termite patrols, which you do not need to kill to complete the quest.