In the Service of Revenge 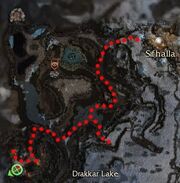 "[Difficulty: Master] Poor Ural! At least he is with Dwayna now...

I want the Summit who did this to taste the pain of my vengeance, even if it's not by my hand. I have promised to remain here to defend the encampment. Here's a thought: YOU go to that vile camp and dispense bloodshed the Stone Summit so richly deserve. Bring those murderers to justice!"

Accept: "Revenge is best served with cold, cold steel. And fire."
Reject: "You know doing this won't bring Ural back."

"I'm glad they are dead, but it won't bring my brother back. I will remain here in King Jalis's service. Ural would have wanted it that way."

Start from Sifhalla (or alternatively Olafstead and go north), zone into Drakkar Lake and follow the quest marker to the Stone Summit's encampment in the caves. There will be a great number of Stone Summit at the encampment. Careful pulling is advised — the groups have multiple healers and it's easy to become overwhelmed. A Minion Master and Scourge Healing can make this quest much easier.

Note: Dvalinn Stonebreaker's group does not need to be killed to complete the quest; only the other groups need to be defeated.