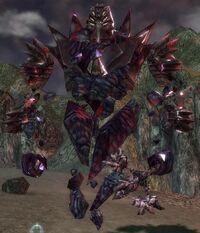 The Jade are magical constructs created by the Mursaat. They appear to be animated heaps of purple rock.