GuildWiki
Register
Don't have an account?
Sign In
Advertisement
in: Has stub sections, Heroes (Eye of the North)
English

Kahmu is a human dervish hero in Eye of the North.

Kahmu is an Elonian Dervish, a native of Vabbi, who seeks wisdom through combat. Over the years, he has drifted farther and farther north, matching his skills against all manner of challenges, considering no fight too small—or too large.
Once Kahmu arrived in Norn territory, he challenged—and bested—some of the Norn's greatest warriors, and his name became legend around the campfires. Some claim he is a spirit, others that he has been blessed by the spirits of his homeland, and still others that he is a Norn born in the wrong body. Kahmu only laughs to hear these whispers. When the hunting here grows stale, he will simply move on. 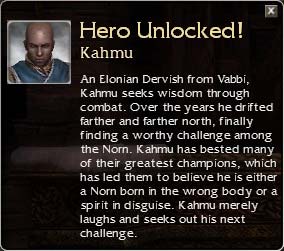 Defeat him in the Norn Fighting Tournament.

Kahmu starts with armor labeled as "Vabbian Armor". Like all basic dervish armor, it provides +25 health and +2 energy regeneration, and has a stated armor rating of 10..70. However, as he joins the party at level 20, his armor rating is never below 70.

See the armor gallery for details of his armor art.

After you defeat him in The Norn Fighting Tournament:

"I... lost. How? I have bested a dozen Norn! I slew a gang of Am Fah singlehandedly! But against you, I have been brought low.... You have my respect, <character name>. I offer my scythe in your service."

It's possible his quote "I like you, I'll kill you last." is a reference to the movie Commando, in which Arnold Schwarzenegger's character John Matrix tells one of the men who has kidnapped his daughter that "You're a funny guy Sully, I like you...that's why I'll kill you last". .

It is possible that Kahmu's name comes in part from French writer Albert Camus (pronounced kahmu). Kahmu shares some of the existentialist traits that are presented by many of Camus' characters- particularly Mersault in 'The Stranger'