Warning: The following text contains spoilers relating to the plot of the PvE campaign.

King Jalis Ironhammer is the wise old king of the Deldrimor Dwarves. He is brother to Brechnar Ironhammer. He provides shelter and supplies to the Ascalon refugees as they cross the Shiverpeaks to Kryta. Later, players aid him in the recapturing of the Dwarven capital of Thunderhead Keep. Although he himself does not accompany the players to the Ring of Fire, he allows his brother Brechnar to join them, along with an army of Dwarves.

During Wintersday, King Jalis can be found in Droknar's Forge.

"It is good to see you again, (character name). Happy Wintersday to you. This pipe? It is a little garish, I agree, but it's not made out of corncob like you'd think! It is actually made of the bones of the horned frost giant Gornash! When you've got the time, I'll have to tell you that tale. It's a good one."

"Some winter, eh? Even a dwarf needs a little something extra to stay warm this year. Take this pipe, for example. You may think its a mere corncob, but...well, let me tell you a heartwarming Wintersday tale. Surely you have heard of the mighty frost giant, Gorgash? No? Why, fifty hands high and twenty kegs wide he stood! The very mountains trembled beneath him. I was a bit more spry and light-footed in my younger days, so when Gorgash threatened my village, I took up my hammer like any stout young dwarf would and beat him to a pulp. And then...and this is the heartwarming part... I made this pipe out of his bones! A touching story, eh? Well, this Wintersday season reminds me of those years long past. You say you need a pipe Hmm. Though it would be a shame to part with it, I can think of few humans more deserving. You have done much for the Deldrimor Dwarves. Please, (Player Name) take this magic pipe as a gift. For the children." 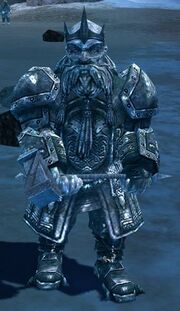