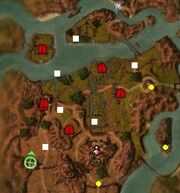 You start off in a cell, with a Kournan Guard and Kournan Taskmaster chatting outside. After a few minutes they move off, and Haroj Firemane frees you from the cell. Haroj will follow you for the remainder of the mission, but will not fight. The next objective is to obtain Cell Keys from the Kournan Taskmasters in the area. One is located near each of the white squares on the map. Use those keys to free the imprisoned Veldrunner Centaurs from the cells marked on your mini map. Five of the Veldrunners are level 20 rangers, and the sixth is a level 24 ranger boss.

Your opponents in this mission are primarily groups of four to six Kournans. Some stay in fixed locations, usually guarding imprisoned centaurs. Others will wander very long distances, and will chase unusually far once engaged in combat. Be careful when pulling to avoid fighting more than one group at a time.

After freeing all the Veldrunners, you are ready to assault the Kournan fort to the south. There are three separate groups of Kournans in the fort, and they can be pulled apart somewhat. Killing the group that includes Overseer Boktek and Overseer Haubeh will complete the mission. You don't need to kill all of the other Kournans.

The bonus consists of killing three cruel taskmasters, each of which is near the edge of the map, in areas that you need not go for mere mission completion. The locations of the cruel Taskmasters are marked by yellow dots on the map above. They are each accompanied by three Kournan Elite soldiers, who must also be killed in order to fulfill the bonus. Even if uninterested in the bonus, it may be useful to kill a taskmaster for the morale boost.

Many groups will wander very long distances, and once aggroed, will chase unusually far if you try to run away. Be very careful about pulling, watch radar, and move out of the way of any approaching groups while you're already fighting another group. Taking on two groups at once can be big trouble.

In particular, when you approach the group guarding the centaur boss, a roamer group will come from behind it and move west. Approach from the west to make it start moving, and then back off and wait for it to come out of range of the stationary group. Similarly, when approaching Taskmaster Sadi-Belai's group, another roamer group will come up from behind it. Come close enough to make it start moving, then back off and wait for it, so you can kill it without having to fight the boss group at the same time.

Kournan Priests can be a major pain, as they can heal huge amounts of health with Zealous Benediction. Dazed and Backfire can help, but neither are reliable. The Kournan Phalanxes and Kournan Elite Spears will remove dazed with Cautery Signet, as well as other conditions that you may use to try to limit mob damage. Priests can remove hexes with Convert Hexes, though this skill is pretty limited and can't self-target, so they can't remove hexes from themselves. Enchantment removal helps quite a bit when trying to spike single targets, so that you can remove Shielding Hands.

Many of the mobs spawns are random, in that some fixed number of Kournans will spawn in a linked group, but which particular mobs actually spawn are random. The difficulty of groups can vary quite a bit by composition, but the probability that you'll have to face at least one fairly difficult group is pretty high. Groups with multiple priests can be especially troublesome. It can help to spread damage around, especially with attacks that hit multiple targets, to get priests to misdirect heals away from whichever character you're trying to spike at the time.

The garrison at the end has mobs split into three separate groups, and it helps immensely to fight them separately. Pull them somewhat, so that you don't accidentally aggro one group while fighting another. Your centaur allies are trappers, and you can kill melee mobs pretty quickly by pulling a group, then running far enough away for mobs to run all the way up to the centaurs--and into a big stack of traps.

Kournan Guard: Another double shift! I don't get it. We have enough guards here to storm Istan.

Kournan Taskmaster: We can't take any chances, so shut your mouth...or me and my cell keys will shut it for you.

Kournan Guard: Shove your keys in your pocket. I'm taking a break.

<party leader>: Well Zhed? Is this the part where we "trust" you?

Haroj Firemane: Ahai! Let me get you out of here and we can free the rest as planned.

Zhed Shadowhoof: Come now, you did not really think I would turn you over to the Kournans, did you? I would die before I gave those dogs what they want.


Zhed Shadowhoof: We are not yet ready to storm the garrison. Centaur holding cells remain locked, and the numbers are still on the side of the Kournans. Free all of my brethren. Only then will we stand a chance against the garrison guards.


Zhed Shadowhoof: Only Mirza Veldrunner remains a prisoner. Prepare yourselves. Storming the central garrison will be no easy task. Approach with caution.

Zhed Shadowhoof: Mirza Veldrunner will take my people home from here. I shall come with you.

<party leader>: Why should we trust you? You didn't share your plan with us until it was almost too late.

Zhed Shadowhoof: I feared you would flee if I told you too soon, two-legs. You are made of sterner stuff than I had thought.

<party leader>: My friends and I risked capture for you, and you still use that 'two-legs' talk.

Zhed Shadowhoof: Of course. I am sorry if I have offended you. I shall trust you fully if you allow me to help."

<party leader>: All right. You can come along. We can use your help. But watch your language.

Varesh: Who is responsible for this?

Varesh: Captain, why did you not kill the traitors when you had the chance?

Kournan Captain: We . . . we thought you would want them alive, Warmarshal.

Varesh: You were mistaken, Captain.

Morgahn: Varesh! The captain was just doing his duty!

Varesh: As I do mine, General Morgahn.

Morgahn: Yes, but such discipline will soon leave us without soldiers at all!

Varesh: You are right, Morgahn. I apologize for my impulsive response. Now is a time for clear thinking. General Bayel!

Varesh: Take the Hunger, and whatever forces you need! I want these Sunspears dead!

General Bayel: Your words are my deeds, Warmarshal.

Varesh: You are a good soldier, Bayel. I would expect no less.