Koss is one of the Heroes (customizable party NPCs) available in Guild Wars Nightfall. A cheerful, boisterous fellow Sunspear, Koss has almost as much faith in you as he does in himself. His family name is Dejarin. His father is Zudash Dejarin and his sister is Ailonseh Dejarin. He left on bad terms with his father when he decided to join the Order of the Sunspears.

An idealistic and brutally effective soldier, Koss has great hopes for the latest generation of Sunspears. He's proud of what they've done, sometimes to the point of arrogance. With brute strength and overwhelming confidence, he cheerfully muscles his way through one confrontation after another, often using the same approach when dealing with people. For the good of the Order, he's used a combination of ruthless charisma, physical intimidation, and flexible morality to build up a network of contacts and informants. Of course, some of those contacts aren't entirely trustworthy. Dealing with the dregs of the underworld has its risks, but when the fate of his homeland is at stake, he'll do whatever it takes to keep Elona safe. When push comes to shove, Koss is a loyal ally, a dedicated Elonian, and most importantly, a two-hundred-and-fifty-pound fighting machine.

Koss can find a way to get along with just about anyone. He gets along with heroes, doing whatever it takes to help the Sunspears protect Elona. He’s courageous enough to say what others are afraid to say, and he'll do what others are afraid to do. He also gets along with the less respectable representatives of Elonian society. For the good of the Order, he's used a combination of aggressive charisma, physical intimidation, and sympathetic morality to build up a network of informants. Of course, some of those contacts aren't entirely trustworthy, which means his information has a price.

Because of a few questionable deals with informers, Koss doesn't entirely get along with his commanding officers. He's managed to talk his way out of being discharged outright, but his extralegal activities have taken a toll on his career. He's skillful enough in combat that he should be an officer by now, but an officer with contacts in the underworld is a risk the Sunspears can't afford to take. Despite that, he knows their investigations need information, so as a loyal Elonian, he'll keep doing what it takes to save his country... no matter how much of a personal sacrifice that might be. 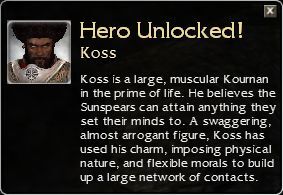 Complete the primary quest Into Chahbek Village, which is obtained from Kormir.

Characters of other campaigns unlock Koss during the primary quest Battle Preparations, obtained from Seamarshal Bendro.

R indicates that Koss must be in the party

Koss starts with basic Warrior armor, which includes a Brute's Helm, labeled as Sunspear Armor but with its own unique appearance. Like most heroes, his headgear is hidden. His armor has +20 armor vs physical damage and an armor rating of 23 to 80, depending on his level.

"There aren't enough corsairs in the world to defeat us. Eh, (character name)?"

"Don't sweat it. If the Kournans want a fight, we'll bring it to them."

"I'll meet you back at the Command Post in a flash! I have a few things to take care of before then."

"Ahai, old friend! I stand ready to assist you. I have the most dangerous weapons and the deadliest wit this side of Vabbi. Best of all, I'm entirely genuine and modest, from the tips of my boots to my dashing good looks. You can always rely on me!"

"It was my honor to fight by your side, old friend."

To Kill a Demon:

In Island of Shehkah, as an ally:

As an opponent in The Norn Fighting Tournament: