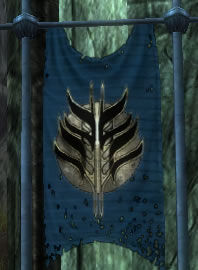 The Banner of the Kurzick

The Kurzicks are one of the two vassal nations of Cantha, with the other one being their arch-enemy, the Luxons. These two vassal factions enjoy a great deal of autonomy under the umbrella of the Canthan Empire.

In the House zu Heltzer (HzH), you can set your Guilds Alliance to Kurzick, provided you are the Guild Leader and currently not allied with a Luxon Alliance. The cost is 500g.

If you are currently in a Guild Alliance and wish to leave it, Hit "G", click on Alliance tab, then click on your Guild. At the bottom of the screen a button will appear, "Leave Alliance". Again, you must be Guild Leader in order to perform these functions.

The Kurzicks settle in the Echovald Forest, carving their homes and buildings in the trunks of the giant petrified trees.

The Kurzicks are a spiritual people who see signs in everything around them. Divination and foreseeing the future have a prominent place in their culture. According to their own words they respect innovation and creation above all else. Their society is a church-state governed by the Council of Nobles who stipulate laws and make decisions based on the guidance of their spiritual leaders, the Redemptors. Furthermore there are five Great Houses, noble families with great influence on the Kurzick nation, with lineages that can be traced to the earliest history of Cantha and beyond.

The Kurzick flag has a slight resemblence to Abaddon's mask, or a Mursaat's head.

Note: That the Kurzicks are a nation of their own, with a culture separate from both the Canthans and the Luxons becomes very clear because of their distinctive look and language, which is very different from the typical Asian-inspired Canthan theme. Their look can be described as "gothic", wearing quaint robes/suits and hairstyle. Their preferred colors are grey and purple. Kurzick names are inspired by European rather than Asian languages, using typical names, words and phonetics from Germanic and Slavic languages. The Kurzicks do, however, have some Asian influences, such as their Kabuki inspired hair and makeup.

In 1072, the Kurzicks are locked in continuous feud with their arch-enemy, the Luxons.

The conflict goes back two centuries, to the death of Emperor Angsiyan. Before that time, Kurzick and Luxons used to tolerate each other, and even cooperated. The Emperor's murderer Shiro Tagachi was brought to justice by the joined forces of the Kurzick champion Saint Viktor and the Luxon champion Archemorus. Unfortunately both of them were killed by the Jade Wind and the Kurzicks and the Luxons got into an argument over the circumstances of the event, both claiming the laurels for their people, which eventually sparked the war among them.

Right after the war began the two sides also separated their habitats: The Kurzick entrenched in the Echovald while the Luxon settled in the Jade Sea area. Locations along the borderline between these regions, such as Fort Aspenwood, The Jade Quarry or the Harvest Temple in the Unwaking Waters are fiercely fought over to this day.

Both factions have delegates (and even spies) in the court of their liege lord, the Emperor of Cantha. The Emperor manipulates both sides, keeping them in a stalemate to guarantee that neither gains supremacy and that their never-ending squabble does not harm the empire.

Interestingly enough, the Kurzick/Luxon War was started because neither side could decide whose hero slew Shiro Tagachi, while in fact, both Saint Viktor of the Kurzicks and Archemorus of the Luxons slew Shiro at the same time, each using one of Shiro's own swords.

Some of the Kurzicks that are most prominent in the storyline are:

The Kurzick character fashions were conceived by Kristen Perry.