Lahtenda Bog is a low-lying, swampy explorable area in the south of Istan. The geography is very tight and its many twisting paths, low light, and a large size contribute to an appropriately eerie atmosphere. There is a shallow inlet in the west, and a tomb in the southwest, where the Sunspears once buried their dead. 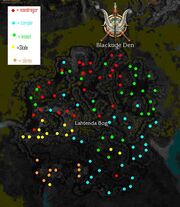