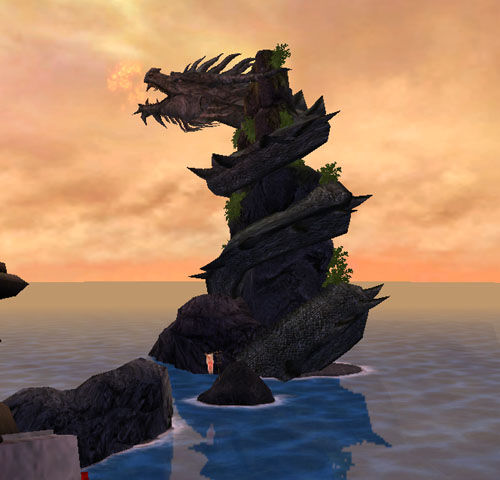 The Lighthouse Dragon off the coast of Shing Jea Island.

The "Lighthouse Dragon" can be found on the most southwest tip of Shing Jea Island, in Panjiang Peninsula, west of Port Kaimu.

Some believe this so called "Lighthouse Dragon" to be one of the Elder Dragons that will be the main antagonists in Guild Wars 2, but nothing is known about this supposed dragon, and there is no indication in any of the official GW2 background documents indicating such a dragon even exists.

An identical dragon statue can be seen (from a different angle) in the harbor of Kaineng City, making it very likely both of these identical lighthouses are, in fact, lighthouses constructed by the Dragon Empire.