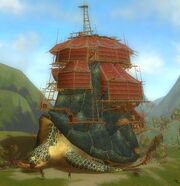 A Giant Turtle outside the Luxon Settlement

Location of the Luxon Settlement

After arriving in Kryta from Cantha on board Captain Xaomei's ship the Flying Crane, the Luxon refugees began establishing a Luxon Settlement in North Kryta Province. Unfortunately, their chosen location was ill-advised, as the area was swarming with ettins and Caromi Tengu.

After the area was cleared of Ettins, the Luxons have moved in and settled into a quaint spot.

The Luxon settlement existed for around 3 weeks before Factions came out. It no longer exists.

The Luxon settlement was introduced briefly as an introduction to the Luxon and Kurzick peoples. After the release of Guild Wars Factions, the site was removed from the game. Also, despite being removed, the buildings of the settlement still appear on the map screen.