This background lore related article is a stub. You can help by adding to it according to the style guide.

Margonite ruins in the Crystal Desert

Margonites are a species in the bestiary of Guild Wars, first referred to in the Prophecies campaign, and later physically appeared in the Nightfall campaign.

The Margonites were an ancient seafaring civilization who visited what later became the Crystal Desert 'hundreds of years' before the current time, and predated the Elonians.

In their attempts to achieve Ascension, they constructed towers in order to ascend to the gods, not realizing that it is not by physical means one may ascend. Like all others, the Margonites failed.

At the time the Margonites attempted Ascension, the Crystal Desert was mostly covered in water. Being a seafaring civilization, their architecture is primarily constructed out of (or built to resemble) parts of old ships. Their greatest concentration of settlements appears to have been in the southeast corner of the Crystal Desert near Thirsty River and Destiny's Gorge.

According to the lore[1], the Margonites worship Abaddon and are his loyal servants:

"Civilized nations recognise revere the Five True Gods. But heretics speak of a sixth god...a fallen god. A thousand years ago, the spiritual ancestors of these heretics, the Margonites, fought an epic battle on the northern plains of Elona. The resulting carnage created a vast wasteland - the realm now known as the Crystal Desert.
Empowered by the blessings of their dark deity, the Margonites waged wars against the followers of the Five Gods - smashing temples, desecrating shrines and butchering all rivals. Yet, despite the awesome power granted by horriffic transformation, their army was annihilated; their false god was exiled to a realm of torment."

Margonites are tall, six-eyed humanoids with bodies made partially of heavily scarred, greyish flesh and partially of purple flames. Many also have mutations such as extra limbs, wings, tendrils and piscine features, some Margonites also have the ability to float above the ground.

Some or all Margonites are former humans. The transformation has made them extremely long-lived, as well as sterile.

Margonite settlements were first recorded appearing along the coastlines of Elona in 25 DR. However, the scripture of Abaddon, which told of the story of Jadoth, the first of the Margonites, was not written until 199 DR (1 BE). It is unknown if Jadoth was merely the first to be given magic in 1 BE (defining a new generation of Margonites); or if the Margonites as a race received magic as early as 25 DR, almost two centuries prior to the other races receiving magic.

In the Yatendi Canyons, a Whispers Informant says of them:

"Perhaps you've heard of Margonites? Dark magicians sworn to serve evil? They arrive with demons and black rituals and leave behind only death and destruction." 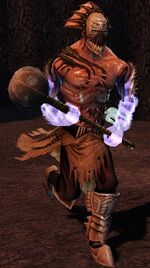 There are a few possible explanations:

The Margonite concept art also heavily resembles both the Mursaat and their Jade minions. All three of them also seem to resemble concept art of the sixth god.

The theme of boats in their desert settlements could be due to the fact that Abaddon was god of water.