Margrid, also known as Margrid the Sly, is one of the Heroes available in Guild Wars Nightfall. A mercenary corsair, Margrid sees you first as potential targets and only later as allies.

She has a sister by the name of Shahai the Cunning.

"Risks? So there are risks. That's just part of doing business."

A native of Freeman's Cove, Margrid was born a sailor. She took her first steps on the rolling deck of a sailing ship, and she proudly claims to have sea water in her veins. She's not just a corsair—she's the descendant of generations of corsairs, a woman who knows no other way of life. Life on land seems strange, predictable, and dull by comparison. People on land have vastly different ideas about morality and business, but for her, the Code of the Corsair is as immutable as the laws of nature. Land-dwellers sometimes regard her as a little shady, overly cynical, and blatantly self-interested, but those qualities are essential to anyone who survives in a world troubled by pirates and thieves. She's learned to roll with the punches, coping with everything life throws at her. Anyone who travels with Margrid should be ready for an exciting, dangerous journey. If Margrid has anything to say about it, the venture will be eminently profitable as well. 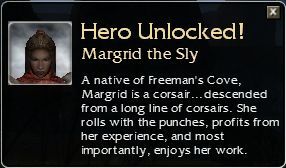 Any character that accepts Secrets in the Shadow must instead complete the Nightfall campaign by finishing the Abaddon's Gate mission, then accept and complete the quest Gain Margrid, given by Margrid the Sly in the Throne of Secrets.

R indicates that Margrid the Sly must be in the party

Margrid starts out with Corsair Armor, with a Corsair Mask for a headgear. Her armor is similar to standard Ranger armor, with the armor rating of 64 to 70, depending on her level.

"A corsair's life is simple: sea, ship, and silver, or in this case... cold Istani coin. Pay well, and you'll have my loyalty and my bow. Get stingy with me and you'll regret it for the rest of a very short life."