The Master of Whispers is one of the Heroes available in Guild Wars Nightfall. The Master is a man of mysteries, his true name unspoken, his motives unrevealed. You, however, are instrumental to his plans. He is the leader of the Order of Whispers.

His real name is Jurah, as revealed to Norgu and your character in the cutscene of the Dzagonur Bastion mission.

Dare not speak the name of the Master of Whispers – not unless you have a good reason for doing so. This cryptic figure is so mysterious that he's hidden his real name; instead, he's always addressed by his title. The Master of Whispers has unquestioned command of an efficient organization, although many debate what form his authority actually takes. One rumor holds that he's the province's spymaster, keeping a job where he serves as a central collector of information from spies across the nation (and perhaps beyond). Others believe he deals with supernatural threats, training his agents as ghost seekers and demon hunters. Whatever the truth may be, he often finds reason for traveling with adventurers exploring Elona (and perhaps beyond). His reasons for doing so are strictly on a need-to-know basis. You're just not ready to learn that yet. 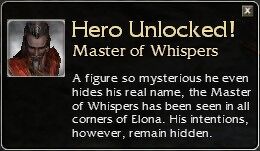 The Master of Whispers starts out with Mysterious Armor.

"No need to introduce yourself. I know exactly who you are and what you're capable of. Half the people you've met in Istan work for me, whether they realize it or not. My name? That is unimportant. All you need know is that I am an ally, and that I know as much about our enemies as I do about you."

"The Order of Whispers is indebted to you for all that you have done. Elona does not know the full extent of your actions. We do."