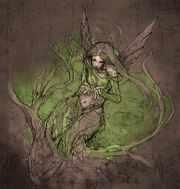 Mural in the Catacombs. 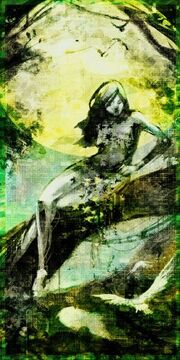 Mural in Gandara, the Moon Fortress. 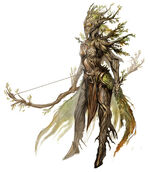 Dervish as Avatar of Melandru

Melandru is the goddess of earth and nature. She is the patroness goddess of Rangers, Earth Dervishes and Geomancers.

The goddess of earth and nature, Melandru is the favored god of Rangers and earth Elementalists. It is said the Maguuma druids at one time worshipped this deity, but there are none alive today who can confirm the truth of this rumor. Melandru is frequently depicted as a human female torso whose lower body is the trunk, branches, and roots of a living tree. Her statues attract weary travelers. Beneath her branches await plenty of fresh water and shelter from the elements.

Melandru is frequently depicted in Cantha as a tall, winged dryad from the waist up. Canthan artists usually describe a severe figure ensconced in an outcrop of Echovald quartz. Melandru's roadside temples offer shelter, food, and water to weary travelers even in Cantha, though such shrines are few, and separated by long stretches of lifeless stonescape.

Most statues of the goddess of Earth and Nature show her as a tall, winged dryad rising from a tree-shaped base. Many temples use magic to shape that shrine from a living tree; for example, Elonian sculptures often rise from the base of a mebayah or a rooted dreamflower. A Dervish assuming the Form of Melandru has an arboreal appearance, acting with the same resolve as a tree with roots deep in the earth.

This inscription can be found on the Statue of Melandru: