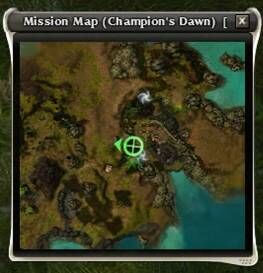 An adjustable window can be viewed by pressing the default key "U". The map window is useful to give you a larger view of an area than what is visible in the compass, as well as showing a trail of your route in the current explorable area. Certain missions and quests may also add marks to your area map, which are not seen on the M key travel map, or compass map.

The mini Map Area allows you to see a map of explored areas of an underground or otherworldly area, such as Sorrow's Furnace or the Undercity, which normally have no place on the travel Map. This is extremely useful to navigating these often labyrinthine realms.

The mini Map Area also (since the introduction of Nightfall) displays the locations of all discovered Resurrection Shrines, as well as those of Collectors and a popup description of what they collect (but not what they sell).

Unlike the main map, you cannot "map travel" with the minimap, nor can you draw on it. However you can place Hero flags on it in the same way as you can on the Compass.

The map area window is adjustable: