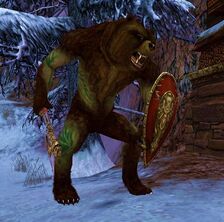 Most Norn can use the Bear Form skill, and will typically do so whenever challenged to a fight.

The Norn are a race of shape-shifting half-giants who dwell in the Far Shiverpeaks.

In the Eye of the North expansion pack, Norn appear as NPCs through much of the Far Shiverpeaks, where they guard resurrection shrines and portals. Typically, the Norn will challenge the player's party to a fight, and the Norn will only talk to them after he or she is defeated, earning the party a number of Norn reputation points. A typical Norn NPC will be defeated automatically when their health has decreased to a certain percentage. Norn guarding resurrection shrines will typically give the Norn hunting party blessing.

The Norn are planned as a playable race in Guild Wars 2.

According to the May 2007 issue of PC Gamer the Norn will get a race-specific skill which allows them to transform into a half-bear form, increasing melee damage and Health.