The Norn Spear is a spear crafted at Gunnar's Hold by Keti. To be able to craft it, the character must have rank 4 in the Norn Title Track.

Eye of the North expansion

Dye will change the color of the entire handle of the spear and the yellow parts of the design on the spear's head, with the exception of white dye, which dyes the entire spear white. 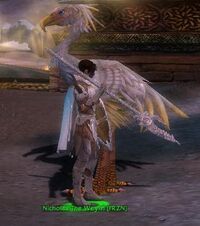