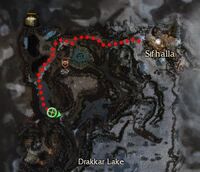 Location inside the caves

Alternative location beside the lake

Magni the Bison in Gunnar's Hold

Kahmu is required in the party

"Let me tell you of the Dervish, Kahmu. My people speak of him with great reverence... a Norn born in the wrong body. I had such high hopes for him until his... unfortunate... defeat in my tournament. If Kahmu wants to prove he's worthy to stand with us, there is a ritual he can undertake. He must track down and slay a mighty beast. Simple, really.

A great jotun is harrassing travelers en route to my tournament. Hunt down the beast, and Kahmu may redeem himself in our eyes. It was last seen in Drakkar Lake, near the outskirts of Sifhalla. You would be wise to begin your search there."

Accept: "Time to prove your Nornhood, Kahmu."
Reject: "I reject cultural labels. Kahmu'll be fine on his own."
When asked about quest: "Are your tracking skills so poor? Head to Sifhalla and search for the beast within Drakkar Lake."

Kahmu: "See here, these are jotun tracks. They lead to the west. No doubt it has gone into that cave..."

"So, you return victorious! I knew that there was yet potential within Kahmu! Tell him that under Norn tradition, he is now a man! Perhaps some day he will grow up to be a splendid fighter capable of challenging me. Ha!"

The troublesome jotun, Lann Browsmasher, appears to spawn in one of two locations. Holding down the ALT key will reveal "Suspicious Markings," which you can follow to his general area. Kahmu should initiate a dialogue to indicate this when you come across the first set of markings.

The first location is indicated on the map image above. Starting from Sifhalla, go west towards the entrance to the Sepulchre of Dragrimmar dungeon, then straight south until you find Lann Browsmasher.

The second location is directly south of Sifhalla on the south-east shoreline of Drakkar Lake, by the rocky cliffs.

Although he hits hard, he is alone and is not much of a threat.