This glossary entry is a stub. You can help by adding to it according to the style guide. 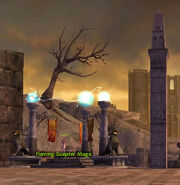 An Obelisk at the Nolani Academy, guarded by a Flaming Scepter Mage

Obelisks are structures that can be found in some of the Global Tournament, Random Arena, and Codex Arena maps. They are akin to defensive towers in strategy games. Any team can activate them by placing their flag in the center of the Obelisk. Once activated, the Obelisk will automatically attack members of opposing teams with Obelisk Lightning. Other teams can take over the Obelisk by replacing the flag with their own flag.

Obelisks also feature in some of the PvE missions, like the Ruins of Surmia. Here they are not activated by flags, instead parties need to lead NPC mages towards them. These mages will then man the Obelisks and attack enemies with fire spells.

There is also an Obelisk flag stand in the Isle of Meditation guild hall. This one and the Brawler's Pit arena map damage using Fireball.