Olias is a Hero available in Guild Wars Nightfall that can only be recruited if the player has a linked Guild Wars Prophecies account. He is a former White Mantle who, after an encounter in the Temple of the Ages, was converted to the worship of Grenth. He came to Elona to help fight the outcast god that threatens to rise again and challenge Grenth's reign over the realm of the dead.

"Grenth lives! You, on the other hand, must die!"

Origin: Tyrian (Lion's Arch)
Age: 32
Profession: Necromancer
Olias used to take his marching orders from the White Mantle, but he now walks his own path. An encounter at the Temple of Ages convinced Olias that he had been chosen for a special mission: he now serves as Grenth's personal "hand of judgment," enacting what he sees as the will of his god. He lives by a simple code. Those who perish and return to life are expected by Grenth to live their lives well. If they do not, Olias ensures they are returned to the cold embrace of the Lord of Death.

Mysterious events in Elona now compel him to act on Grenth's behalf. With strange disturbances in the land, Olias feels that the gods are threatened and the dead themselves are uneasy in their eternal sleep. He has sworn an oath to Grenth that he will find the source of the strange malady and correct it. And if it involves sending new minions to Grenth, so much the better! Death and killing delight him. He is willing to discuss other matters, but strangely enough, most discussions seem to lead back to death and killing. 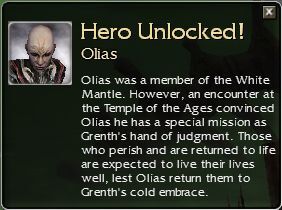 Complete the quest All for One and One for Justice, which can be obtained from Dinja in the Consulate Docks. Your account must be able to access both the Prophecies and Nightfall campaigns.

He can still be unlocked for accounts without access to Prophecies, but only for PvP, by spending Balthazar Faction.

R indicates that Olias must be in the party

Olias starts with a basic Necromancer armor labeled as Krytan armor, although it actually appears to be undyed Shing Jea armor. The armor rating ranges from 45 to 60, depending on his level.

The appearance of his armor can be upgraded to Mysterious armor using Mysterious Armor Pieces acquired from the The Shadow Nexus Challenge Mission.

The appearance of his armor can be upgraded to Primeval armor using Primeval Armor Remnants acquired in the Domain of Anguish and during The Ebony Citadel of Mallyx mission.

In the Bloodstone Fen:

"To ponder life is to ponder death. One cannot exist without the other."

"By Grenth's blessing, you succeeded where another would have failed. Remember his part in all this, hero, and praise him even as you are praised"

Heart or Mind: Garden in Danger:

Idle quotes that do not appear to depend on storyline progression: