The Poisoned Outcrops are an explorable area in The Desolation. It is notable for having no Wurm Spoors, and must be explored completely on foot. The only sulfurous areas are at the bottom of deep canyons that define this area's topography. Perhaps the relative lack of sulfur, the clear sky, and the twisted palm trees that grow here are a sign that this area is less affected by whatever corruption tainted the Desolation then the rest of it. This would make some sense, as the Outcrops are the Northernmost point not only in the Desolation, but in Elona. 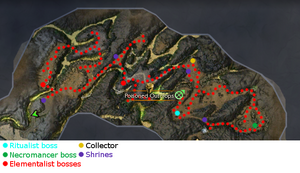