Pre-Searing Ascalon is the tutorial area of Guild Wars Prophecies. Like most tutorial areas, it has a very friendly "perfect fairy tale" theme to it.

Here you are introduced to the background story and the main NPC characters. Here you learn your first skills from Profession trainers and choose a secondary profession.

In Pre-Searing, if you're killed, you're resurrected by the nearest Resurrection Shrine without Death Penalty. This means you can "rinse and repeat" until you've cleared an area.

Enemies lower than level 2 are not aggressive, with the exception of Restless Corpses and Diseased Devourers in The Catacombs. Non-aggressive monsters will only attack you if you attack them first, or under some circumstances when another of their species is fighting you. Enemies of level 2 and higher, with the exception of Bandit Raiders, will attack you whenever you enter their Aggro Circle. Thus be careful of walking amidst a group of peaceful Level 1 Grawl when there is a level 3 Grawl Longspear just outside of your Aggro Circle.

Enemies with level 1 or 0 receive no natural health regeneration when not in combat. Thus if you are killed while fighting a mixed group of enemies far away from a resurrection shrine, by the time you run back, higher level enemies would be at full health, but level 1 and 0 enemies would be at whatever health level they were at when you last fought them (unless they were healed by a skill).

Warning: The following text contains spoilers relating to the plot of the Prophecies Campaign.

When you accept the offer from Sir Tydus to join the Ascalon Guards and you enter the Ascalon Academy, there is no turning back: After you've accomplished the academy trial fight you see the Searing (the destruction of Ascalon by the Charr) happening in a cutscene and - after a two-year time skip - you find yourself in the post-searing Ascalon City ruins. This is where the real game begins.

The Ascalon Academy consists of two parts, a PvP match and a short mission with Prince Rurik. If you quit the game during either of these you will return to the beginning of the mission with Prince Rurik the next time you login to that character and the map will have no points for you to teleport to. (He wasn't joking when he said "No turning back.") Sometimes the PvP match will be skipped due to lack of people entering at a time, or if just over the limit enter during a wait (If you are the only person or the ninth and last person the PvP will likely be ommited for you).

Narrator: "The last day dawns on the Kingdom of Ascalon. It arrives with no fanfare, no tolling of alarms. Those who will remember, will speak fondly of the warm morning breeze. People carry on with their daily lives, unaware that in a short while... everything they have ever known will come to an end."
King Adelbern: "Scribe."
Scribe: "Yes, my lord?"
King Adelbern: "These Charr are relentless, but we shall hold the Wall at all costs."
Scribe: "Yes, my lord."
King Adelbern: "Take this message to Sir Tydus: Go forth and recruit the strongest, the smartest. Bring to me the bravest in all of Ascalon. Find me the heroes who will lead our kingdom to glory."
Scribe: "As you command, my king." 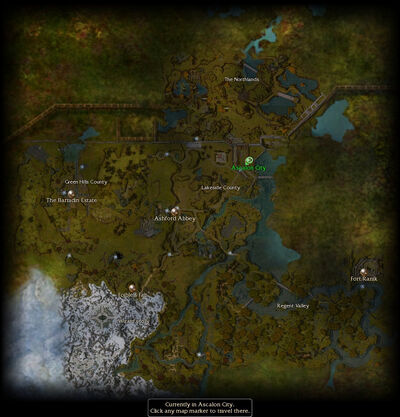