This item-related article is a stub. You can help by expanding it according to the style guide. 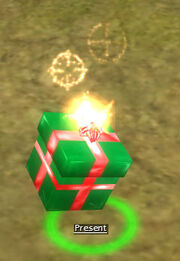 During the Wintersday Festival in Ascalon, Lion's Arch, Droknar's Forge and Kamadan a present spawns in one of the locations listed below. If a player picks up the present and gives it to a child (some have names, others are simply called Young Child), the child gives a Candy Cane Shard or a Winter Gift back in exchange.

Note: If the Grentches are greater than an unknown distance from where the present appears, they will teleport to that area.

Children who give Candy Cane Shards

Children who give Winter Gifts

Presents spawned during the Wintersday 2005 update at random locations in the major cities of Tyria (Ascalon City, Lion's Arch, Droknar's Forge), simply lying on the ground. They could be picked up and carried around. When given to a child (some had names, others were simply called Young Child), the child would give a Winter Gift back in exchange. However, this had to be done quickly, because at the same time several Grentches were running around those cities, destroying the presents. As soon as a new present spawned, the Grentches would run towards the location where it appeared. If a player had already picked it up, the Grentches would continue to pursue the player. If they reached the present before it reaches a child, the present would explode (not dealing any damage).

In the Dwayna Vs Grenth PvP game, there are two types of Presents, real and fake, which are visually identical.

The object of the PvP game is to take 5 real Presents either to Dwayna for the children or to Grenth for destruction, depending on the assigned team of the player. Fake presents are booby traps which explode when picked up, and damage the player for 250 health (supposedly the "Gift that might kill you" in the Wintersday 2005 update song).

Real presents slow characters to roughly half of their normal walking speed while carried.

This is the repeat of 2005 present hunt. Periodically a present spawns, players must spot the present, pick it up quickly and deliver it to one of the Young Children in town before any of the Grentches reach the present and destroy it. Grentches can also destroy presents held by players if they come within adjacent range.

In return, the child will hand the player a Candy Cane Shard or a Winter Gift which will unwrap into a random Wintersday item. Grentches move faster than players, however Sugar Rush can be used to outrun them. When a present spawns the Grentches will run all the way to the spawn point before chasing someone who has picked it up. It appears that a new present spawns whenever a present is turned in or destroyed.

Grentches may be temporarily trapped at the Lion's Arch lighthouse. Getting the Grentches to follow a present carrier to the lighthouse will cause the Grentches to become stuck at this location (after they destroy the carried present). Present drops will proceed as usual, and everyone will have a chance to take their presents to Scrappy Jhim.

WARNING: Unfortunately a few people have been seen taking advantage of this situation and holding the present, thus preventing it from spawning. These players will and have been banned for exploiting the game in this way. Such behavior is considered unacceptable.