GuildWiki
Register
Don't have an account?
Sign In
Advertisement
in: Character stubs, Has stub sections, Spoilers, Heroes (Eye of the North)
English

Pyre Fierceshot is a Charr ranger hero in Eye of the North. Exiled for disobeying the orders of the Charr Shamans, he hates the Shamans for using the Titans as a facade to rule over the Charr.

Pyre leads a warband of other Charr against the Shamans, attempting to spur a rebellion. There are at least five other members of his warband, with more implied. Though they share the same last name style, it is unlikely that they are related, as charr last names are shared by warband, not family.

Pyre is an outcast, persecuted by the Charr Shamans for daring to speak out against their ways. After his warband killed a Shaman and destroyed a temple, Pyre and his companions fled the ruling Shaman caste. Pyre hates them with a fury that only one raised to worship false gods can understand; he has been betrayed, tricked, and deceived, and he has sworn never to fall under the spell of the Shamans again.
Pyre celebrated the demise of the Titans, those whom the Shamans called gods, and now watches with rising anger as the priests continue to deceive his people. At every step, the Shamans seek to tighten their grasp, bringing the Charr once again under their false rule—enslaving them to powers who do not deserve respect, much less worship. The cycle of dominance and slavery must be broken—and the Charr must be free...

He can sometimes be seen spectating The Norn Fighting Tournament.

He can be found in Grothmar Wardowns during the quest Against the Charr. 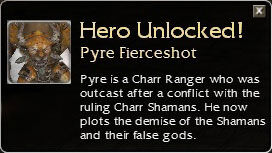 Complete the quest Warband of Brothers.

Pyre Fierceshot has ranger armor labeled as a Charr set. His headgear is hidden. His armor has armor +30 (vs. elemental damage), energy +5 on chest piece, energy recovery +1 on leg piece, and an armor rating of 70.

See the armor gallery for details of his armor art.

"Hate is blinding. I prefer to see my prey."