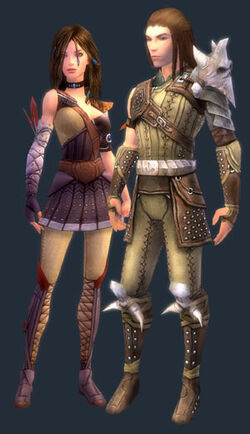 The Ranger is a versatile ranged attacker. While they do not provide as much damage as other professions, they are valued for their versatility. Rangers are renowned especially for their ability to interrupt enemies and the ease at which they spread conditions notably thanks to traps and preparations. They are one of the more survivable classes due to their mid-level armor, arsenal of defensive stances, and self-healing skills. Additionally, a Ranger has the highest armor versus elemental damage of any of the professions. Another feature of the Ranger profession is the ability to tame a pet to aid you in combat. Furthermore, their primary attribute alone can merit using the Ranger as a primary profession, even for builds that do not use many Ranger skills or bow attacks (Touch Ranger or Thumper). Because of all this, a Ranger can fill in many gaps in a party. The patron goddess of Rangers is Melandru.

The Ranger's primary attribute is Expertise, which reduces the energy costs of attacks, rituals, touch skills, and Ranger skills.

See Secondary professions for a Ranger