Razah is a Ritualist hero and is a creature made out of the Mists. It was created with an unknown purpose, and the nature of its origin is more akin to demons than the human form that it takes. Razah is unique among heroes in that its primary profession can be changed.

From the Guild Wars Nightfall manuscripts:

Unformed hero
"I live to serve."

The protomatter that makes up the Mists strains toward creation, often spawning demonic creations in nightmarish forms. Not all creatures from the Mists are demonic, however. When the Mists come into contact with a suitable human template, for example, it can copy that form, creating a sentient entity with humanoid appearance and an almost human mind.

Razah is one such creation. It has sprung into being a fully-formed adult. It has the knowledge and capabilities of a human, but lacks common sense. As a result, it asks odd questions about human emotions, contemplates human motivations, and attempts to duplicate human mannerisms. Razah is a contradiction: more than human in some ways, and less than human in others. It needs an identity, a personality, and a purpose. Hopefully, Razah will find its purpose by working with a hero. Otherwise, it could degenerate into an abomination as monstrous and inhuman as its demonic brethren. 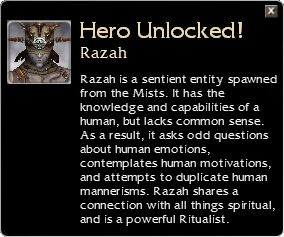 Complete the quest Finding a Purpose, offered by Chaplain Phyratyss in the Gate of Anguish. Your character must have completed the Nightfall campaign.

It can be unlocked for PvP at the cost of 6,000 Balthazar Faction.

You do not need to have Factions campaign to recruit, unlock, or use it.

After recruiting Razah, you can change its primary profession by re-entering the Heart of Abaddon without it in the party. Razah will appear immediately inside the area, and when you talk to it, you can choose a new profession for it.

Caution! All equipped weapons (both primary and off-hand) and any profession-specific runes and insignia that Razah is wearing will be destroyed when you change its profession. (Common runes/insignia are not affected.) Razah's dialogue mentions this and gives you a chance to decline the profession change in order to remove these items.

Razah starts with Mysterious armor at an armor rating of 60. Razah's default weapon is a max 9 req Spawning Staff with damage +15% while Health is above 50%.

In the Heart of Abaddon, if you have not yet recruited Razah:

"You are not from this place. Who and what are you?"

If you return to Heart of Abaddon after recruiting Razah, it will comment on the various surroundings.

At the "wall of eyes" near the first group of mobs:

"I spent days staring into the eyes on these walls, wondering why they were watching at me, what they were thinking, who they belonged to. Are there souls behind those waxy stares, or are they simply the facade of the tormented and soulless dead? I do not have the answer."

Near where the second binding spirit was:

"These plants are fascinating, are they not? They grow throughout the realm wherever there is enough blood for them to feed. Do not touch them; one prick will lead to a painful and certain death."

Finally where you originally found it:

"Although I was bound here, I have no resentment towards this place. The soft, pulsing light that permeates the land reminds me of the Mists."

If you want to change Razah's primary profession:

"I have seen many wondrous sights in my travels with you, yet there are countless paths left to walk. What looking at things from a new perspective? Maybe it is time for me to answer a different calling. What say you?"

"Steel yourself and walk the path of a Warrior."

"Become one with nature, and walk by its side as a Ranger."

"Mend what is broken; safeguard brave souls as a Monk."

"Unravel the secrets of death; become a Necromancer."

"Master the arts of illusion and subterfuge as a Mesmer."

"Channel the power of raw destructive energy; become an Elementalist."

"Commune with spirits and draw upon their power as a Ritualist."

"Inspire those around you and lead them to greatness as a Paragon."

"Become a righteous weapon of faith; walk the path of the Dervish."

"I must cast aside the equipment of my old path before I can walk a new one. Is this acceptable?"

"Yes, everything is prepared."
"No, let's set aside the valuables first."