The Realm of Torment is a continent-region of the Mists, accessed through a portal in Elona.

The Realm of Torment is the prison of Abaddon, the fallen God of Secrets. He was exiled to this place by the five Gods of Tyria. From there he seeks to gain back control and spread evil into the world of the mortals, eventually trying to break from his prison. To stop the Nightfall, darkness consuming Elona, players have to venture into this most hazardous area to defeat Abaddon.

It is revealed by the Reaper of the Bone Pits in the Underworld that the Realm of Torment is a division of the Underworld where the most wicked go to spend eternity in torment.

High level enemies from all three Guild Wars campaigns can be found here, including but not limited to: the Shadow Army, Margonites, Titans, Shiro'ken, and Demons.

All towns and explorable areas in the Realm of Torment do not expose any parts of the map and their map can only be seen using the mission map (default key 'U'). 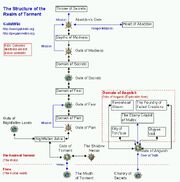 The structure of the Realm of Torment

Temple of the Six Gods

1) Ancient Mesopotamian scriptures (for example a description of Ishtar's descent into the Netherworld) mention seven gates.
2) The Book of Enoch, which is part of the Apocrypha of the Old Testament, describes Hell as a place segregated by seven gates.
3) The Quran (Surah 15:44, 74:30, ...) clearly says that Hell has seven entrance gates.
4) According to Virgil's Aeneid, the river Styx corrals the souls of the dead in nine rings around Hades, the underworld of Greek mythology.
5) Dante's classic poem The Divine Comedy describes Hell as segregated into nine concentrical circles. It is evident that Dante's description had some influence on ArenaNet's vision of the Underworld (see for example: Mayor Alegheri).