Redemptor Karl was at first skeptical that the plague would even affect the Kurzicks. Danika was insistent that he allow the players into Kurzick lands.

In Pongmei Valley, during quest The Count's Daughter:

"This plague is a message from the gods. Clearly they are not happy with the Canthan Empire."

When spoken to in the Divine Path:

"The end comes for us all. You have delayed it for a time, and for that you have my thanks."

Redemptor Karl is a henchman available in the Echovald Forest.

He is rather morbid and dark in his outlook on life, as can be seen from his dialogue and quotes.

Karl has a tendency to use Draw Conditions on Disease, thus infecting the party members standing near him.

"There are many ways to create something. Death for example, can create life. If it is my time to die I would rather it be while creating a new future for my house than deliberating over ancient texts. I cannot choose the time but I can choose the path. Did you need something from me?"

Idle in the Echovald Forest: 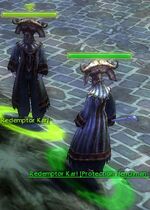