Return of the Undead King 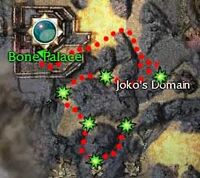 A Deal's a Deal

"The fleshlings return, and not a moment too soon! My armies have disintegrated in my absence, and my former slaves have gone utterly insane. While I was sealed away all those years, those worthless shells shed their restraints and began to attack anything that moved! They are a menace to everyone. Do be a peach and take care of them for me. I'll make it worth your while."

Accept: "I'll smite your rebellious undead."
Reject: "The joke's on you, Joko. You can't keep an undead brother down."
When asked about quest: "The wild undead still walk. What are you waiting for?"

"Excellent. I shall make sure that the vanquished stay that way. The fact that those slaves broke their bonds is an outrage, but they won't be bothering anyone again."

Just follow the quest marker towards each group. They are all on rocky terrain, so you can't use your wurm. Some groups (towards the end) contain multiple Awakened Cavaliers and Awakened Acolytes, which can become a headache because they use Signet of Return and Renew Life. Healers should watch out for Scourge Healing, which is used by the Acolytes.

If a group contains two Acolytes and two Cavaliers, they will chain rez. Frozen Soil is helpful to stop that. Keep the Frozen Soil out of aggro range, but still within effect range of the group. An easy way to judge if Frozen Soil is in range is to plant it when you are within range of their Quicksand.