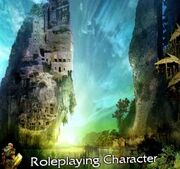 The most important decision you make will be what your primary profession is. This choice cannot be changed without deleting your character and starting over. More information on each profession can be found on the profession page.

Some major considerations when choosing your primary class are:

This will have an effect on the starting location as well as appearance of your character. Note that Assassins and Ritualists can only start in Factions, and Paragons and Dervishes can only start in Nightfall. In Prophecies, you have the option to earn a large number of your skills via quests rather than needing to spend skill points to purchase them. The downside is that many view both the skill quests and the lower experience rewards as a grind process to develop your characters.

Also with the introduction of heroes in Nightfall another feature should be considered. Starting with a character in Nightfall gives you access to heroes early in the game. Starting with other chapters would not give you the ability to recruit heroes until you'd reached a certain point in the game (7 major missions into Prophecies, 3 into Factions). In addition, many heroes will have low levels (mostly 15s but one 11) compared to your level. It is not difficult to level them up, but it is difficult to make them better than henchmen unless you've unlocked skills for those professions by playing them yourself.

The advantages and disadvantages of the campaigns in short:

Prophecies
+ Cheap skills (free but through questing)
+ A good campaign to begin with (keeps the slightly more complicated professions of other chapters "new")
+ A good chapter for learning the game; you don't reach level 20 until much later, and the henchmen's abilities and party size increase slowly with you so it gives you the time to learn how to play with different tactics.

+/- Skills become available more slowly; you learn them as the quests and skill trainers provide them. This encourages you to formulate your own style rather than copying another person's endgame build, which can be a plus or minus depending on what kind of player you are.

- When already familiar with the game, the lower experience rewards can be annoying to less patient players who want to level up quickly.
- Elite skills are not available until much later in the game.
- The attribute quests require you to play a long way through the game, going on some long journeys in vast areas, while in the other two campaigns these quests are on the starter island.


Factions
+ Gives access to the Assassin and Ritualist professions.
+ Rewards from questing allow you to buy skills and level up quickly.
+ Earlier access to other chapters.
+ Early access to elite skills.

- Buying skills can become quite expensive. If you make too many mistakes with gold, you could find yourself stuck without combinations of skills that would allow you to play through the game at a fun pace.
- Due to reaching level 20 early in the game, you could sometimes get in over your head as a beginner, since you haven't had time to become acquainted with some of the more advanced aspects of the game.

+/- Experience gain in Nightfall is faster than Prophecies, but slower than Factions. The same is true for the time required before gaining access to other chapters.

- Buying skills can become very expensive, and the quest rewards aren't as significant as those in Factions so you'll have to keep an eye on your gold pile.

Combining the Chapters
If you have all the chapters, one strategy that works well is to play a Prophecies character first, choosing Monk, Warrior, Necromancer, Ranger, or Elementalist (Mesmer is not recommended for beginners; Mesmers are specialized in countering other professions' skills, so knowing the strengths and weaknesses of the other professions is especially important before playing a Mesmer), since you will be unlocking skills usable by your initial heroes as well as your main character. Once you've reached Lion's Arch, you can unlock 5 heroes by traveling to Elona (i.e., Nightfall: 2 Monks, a Dervish, a Warrior, and either a Ranger or an Elementalist), 1 in Tyria (i.e., Prophecies: a Necromancer) and 1 in Cantha (i.e., Factions: an Assassin). Continue playing the Prophecies campaign, or take a bit of time in Cantha to grab some maximum armor and earn some fast experience for you and your heroes around Kaineng City.

When you discover that you've reached an impasse and you need your heroes to have more skills, start another main character in the profession where the heroes on your first character would most benefit. Repeat this process until you're comfortable with the Prophecies campaign, and then start making characters on the other continents. It is not necessary to take one character all the way through the game on all three continents before starting a second one.

Currently, the campaigns are linked via Lion's Arch, Kaineng Center and Kamadan, so you also have the option to start in one, then switch to another once the linking city is reached. Note, however, that quests must be completed in almost every case to unlock travel to other campaigns. See the articles for Elona, Tyria (continent), and Cantha for more info.

Most Customizable in a Single Chapter: Male Paragon - 14,976 (Nightfall)

Players may choose via a drop down menu whether the name is going to consist of only English letters, or a mix of Japanese and English characters.

Players may choose via a drop down menu whether the name is going to consist of only English letters, or a mix of Chinese and English characters.

Names of purely English characters follow the same rule as North America. Names of mixed characters have to meet the following rules:

(Pet names must be in English)

Players who create characters with obscene names (as defined by the EULA and decided on by the game's administrators) often find their characters deleted, or have their accounts simply banned for a time. Names can be changed; however, not all players who use a bad name get the option of renaming it, so choose carefully if you plan to invest a lot of time in your character. If you're having trouble coming up with a name, there are many fantasy name generators available; a Google search should give you plenty of results.