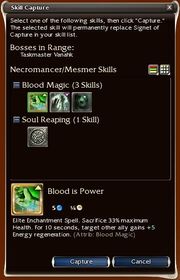 Skill capture (also referred to as 'capping') is a method of learning new skills in Guild Wars. The way it works is that players slay an enemy boss (and only a boss) and then invoke the Signet of Capture to see a list of the skills this boss had. The players can then choose a skill to capture which will replace the signet permanently. Once a skill is chosen, it will be learned by the character and will be stored in that character's Skills and Attributes panel. A skill capture can be cancelled without using up the signet. When a skill not previously known is captured, it is unlocked for the account.

Using a Signet of Capture is one of two ways to learn elite skills in PvE play. The other method, using Elite Skill Tomes, is often much more expensive but allows for skills to be learnt early on despite the elite skills not being available from bosses in the early areas of each campaign. When an elite skill is captured, the character receives 250 XP per level of the character. For a comprehensive list of elite skills available and the bosses and locations where these skills can be acquired, see the elite skills list.

Note: A player can usually only equip one elite skill at a time. However, a player can capture an elite skill even if he/she already has one equipped. As soon as the character leaves the current area (by walking to another, map traveling, or some other way), all but the rightmost elite skill will be removed from the Skill Bar; the others are still available in the Skills and Attributes panel.

Note: In some areas, particularly the Eye of the North expansion, it is possible to encounter bosses using skills from campaigns a player does not own. These skills will appear as locked in the capture window and cannot be captured.

While the primary purpose of the Signet of Capture is for capturing elite skills, non-elite skills may also be captured. Usually this is done when a player wishes to obtain a skill which would otherwise be unavailable until later. In Prophecies, it is usually a bad idea to capture a skill which is as a quest reward since it will effectively cost you a skill point and the skill cost for the signet instead of being free. In the other campaigns, there are no quests which award skills by the time Signets of Capture are available. Unlike when capturing an elite skill, normal skills offer no XP reward.

You may want to form a capping group to capture skills with other players.

An excellent tool for tracking characters' skill capture (and other items)is 'Mapping Out' which can be found via http://www.guildwarsguru.com/forum/mapping-out-aylee-sedai-t10106484.html