Streaming updates have been merged into the Performance Monitor. 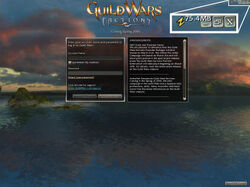 A streaming update being downloaded.

When game updates are released, the program initially downloads a small portion of the update (that which is essential for the update to function). Players can play the game with this initial data, but additional nonessential data is often also released (graphics that will be used in an event which is going to happen soon, or location specific art and changes). This additional data is downloaded while actively playing the game. When players change districts or enter a new areas, they may pause while downloading additional game content (note the description next to the progression bar at the bottom of the screen). Also, when the game is left idle at the login screen, data will be downloaded. This is indicated by the image of a small lightning bolt in the upper right corner of the screen. Next to this icon a number will display the amount of data that has been downloaded.