Sunspear Arena is one of the two arenas added to Random Arenas during the Nightfall PvP Preview Event.You can also enter this arena from the Codex Arena. Battles in the arena are 4v4 Annihilation matches. The terrain is roughly in the shape of a figure 8, with a bridge going over the stream at the center. The water in the arena is shallow and the arena has no environmental effects. 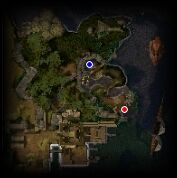 The following applies for this arena (but not for this map when it comes up in Random Arenas):

Talk to the arena guard in Kamadan, Jewel of Istan near the consulate portal, and he will transport you there.