The table below lists all known, efficient Sunspear point farming locations; details are listed in the sections below.

You should be able reach the Commander rank quickly using Skree Hatchling Season and Diamond in the Rough to spawn large amounts of Skree Harpies in a small area. Leave from Jokanur Diggings (or Blacktide Den), take the Insect Hunt bounty immediately outside, then head east to the shrine north of the beach for the Harpy Bounty. Continue east until you reach the quest locations (killing anything in the way). Kill the harpies, but do not accept the reward from Dajwa. Instead, exit to Champion's Dawn, abandon Skree Hatchling Season, then re-accept it from Mofuun. Repeat. You should earn around 80 points for this run.

Foreign-born characters can use A Land of Heroes, a mini-mission that automatically offers Corsair and Kournan Bounties. After completion, abandon the quest and re-take it from Quarrymaster Bohanna until you reach Sunspear Commander. Each session should earn approximately 520 points, allowing you to reach Commander in 2 runs. Ideally, stop before you reach 999 points and restart, allowing you to reach around 1500 points in 3 runs.

Elonians can reach General level through this farm. From Yohlon Haven, exit east into Arkjok Ward and take the Insect Hunt. Four groups of insects are nearby: two groups of 4 to the north, and one group of 4 and a group of 12 to the south. Avoid aggroing the mandragors just past the large group. This run yields 96 points and can be done easily in 2 minutes (and perhaps only 1 minute with an efficient group), i.e. around 3000 points an hour. 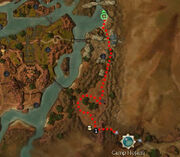 The path in Dejarin Estate

Take the western exit from Camp Hojanu into Dejarin Estate and get the Heket bounty (1). Head northwest killing any heket groups in sight while avoiding any elemental groups. Turn slightly north, then back to the east and finally going up north to clear all hekets from this area. Continue all the way to the north until you reach the boss Podaltur the Angry. Restart this run and repeat as needed. This yields 288 points and takes approximately 8-10 min, or approximately 1800 points per hour.

Since the hekets include non-point producing pets, it might seem more efficient to take the Kournan Bounty starting from outside Pogahn Passage. Clear the western map of all Kournans, including the fortress. Then, return to take down the heket. The combined run takes around 23 minutes and yields 550 points, or approximately 1400 points per hour.

Follow the the perimeter in a clockwise direction to activate bounties for Heket, Mandragor and Corsair. (You can also take the Plant hunt from the center of the area take the Elemental hunt from the Whispers Informant).) In Hard Mode, this can yield 145–200 points. The most dangerous part of the route is in the south-west, where there are large groups of Corsairs, including three bosses. Take care not to aggro too many at a time. 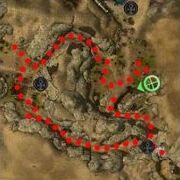 The path in Holdings of Chokhin

From Mihanu Township, exit north into the Holdings of Chokhin and pick up the Plant Hunt. Follow the canyon north until the large open area filled with plants. Work your way in a counter-clockwise manner and be careful: Setikor Fireflower in the southeast corner strikes with Lightning Surge for 400+ damage in hard mode; Enchanted Brambles are capable of layering devastating conditions very rapidly. Take appropriate counters to blind and cripple, such as Assassin's Remedy. Head through the canyon to the west and go in another counter-clockwise circle. Be sure to kill Banor Greenbranch, just northwest of the resurrection shrine. This run takes about 10 minutes and, in Hard mode, yields around 840 points per run, or approximately 5040 points/hour.

The two runs for Sunspear points should be done in Hard mode. They are also a good way to train lower level characters, since the party will be using Junundu and their health, armor and damage are preset.

From Gate of Desolation[edit | edit source] 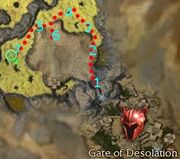 The path in The Sulfurous Wastes outside Gate of Desolation

Exit to the north and take the Undead Hunt (1). Go northeast to the Wurm Spoor, avoiding the Djinn patrol (2). Continue to the north into the sulfur and you will find a group of Awakened (3). Past them to the northwest is another group, along with a few pairs of elementals (4). Next, go west past the wurm spoor for another group (5), which should put you over the bonus limit of 25 undead creatures killed. Turn back and head south onto the plateau to take on Vahlen the Silent and his group (6). This group often has 2—3 Awakened Cavaliers with resurrection skills. Since you only get credit for killing creatures the first time, it is usually more efficient to kill the individuals once and move on. There is another group of Awakened at (7), but it is you can earn points more quickly by restarting the run. This run yields around 576 points and takes about 6 minutes, or approximately 5760 points/hour.

From Remains of Sahlahja[edit | edit source] 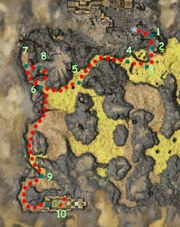 The path in The Sulfurous Wastes outside Remains of Sahlahja

This combines well with Lightbringer points farming. Head east and get the Undead Hunt (1), then head south to the Wurm Spoor (2). There are two groups of Awakened immediately to the south and west (3 & 4). Ignore any Desert Wurms that might spawn near the first group. Head west then south through a canyon, bypassing the Margonites on the cliffs, to find a third group of Awakened (5), with a fourth group just to the east. (Points 6, 7, & 8 are for Lightbringer.) Continue south almost to the Monolith Temple (again ignoring any Sand Wurms), for the last group (9), including the ritualist boss Alem the Unclean. Kill him first, otherwise he heals his companions (and it will not affect your total points earned). (10 is for Lightbringer.) This run this yields over 570 points and takes about 7 minutes, or approximately 4800 points/hour.