Tahlkora is one of the Heroes available in Guild Wars Nightfall. Her last name is Zarranu and she hails from the merchant province of Vabbi. A headstrong young runaway, Tahlkora joins up with you to become a hero. She has to learn what that truly means.

As revealed in the quest Rally The Princes, Tahlkora is a Princess of Vabbi, the daughter of Prince Mehtu the Wise.

"I signed on for the heroic songs and the praise. I did not sign on for the blood-sucking bugs."

Some adventurers are a little too eager to be heroes. Many have tried to guess which village or city Tahlkora ran away from, but Vabbi's a pretty big place. No doubt her home is far away from the horrors of war and the nightmarish abominations that stalk scorched wastelands. She certainly seems well-educated in the myths and lore of the land, but her practical education needs a bit more work. As a young woman dreaming of heroic triumphs, Talkhora [sic] has diligently studied tales of romance and high adventure. She's as fluent with the folk tales of Istani commoners as she is with the thrilling narratives of great literature. Now that she's seen what adventuring is like in the real world, however, the difference between dreams and reality is rapidly becoming more apparent. 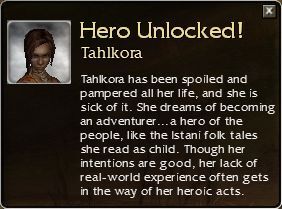 Characters of other campaigns unlock Tahlkora during the primary quest Battle Preparations, obtained from Seamarshal Bendro.

R indicates that Tahlkora must be in the party

Tahlkora starts with basic Monk armor, which includes a Prophet's Scalp Design, labeled as Istani Armor but with its own unique appearance. Her armor has an armor rating of 3 to 60, depending on her level.

In Plains of Jarin, Cliffs of Dohjok, and Mehtani Keys:

"Uhm, hello. What's that? Yes, I'm from Vabbi. No, I'm no one important; just a simple priestess of Lyssa. I know how to heal wounds and protect you from danger. But I don't plan to stay in the temple. I'm going to be an adventurer! You'll see."

In the Tihark Orchard mission:

"Listen, I'm very sorry I didn't reveal my identity, but I didn't think you'd let me accompany you if you knew who I was. We'd best not be seen together right now. I'll meet up with you again once the party is over. My father is extremely upset and he might take his anger out of you."

Why didn't you tell me about your father?

"If it were up to him, my father wouldn't have me do anything but stay at home and act like a princess. I long to travel and see the world, to do something grand with my life and be like the great adventurers the story tellers spin tales about. If you found out who I was, I was afraid you'd just send me back to my father. I'm truly sorry."