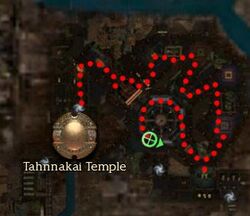 Players start with 10 minutes to free Vizu from the Spirit Binder, and gain 4 additional minutes for each soul freed.

This mission is comprised of a chain of rooms, each containing a Bound Hero boss, a number of Afflicted, and usually a few Temple Guardians. To proceed to the next room, the bound hero must be defeated, releasing the hero who will unlock the gate to the next room. Usually, the boss is not grouped with the surrounding afflicted, allowing the afflicted to be dispatched without encountering the boss. Likewise, Temple Guardians often are able to be pulled without drawing the attention of nearby afflicted. Thus, proper pulling techniques will increase the chance of survival. Beware of the Temple Guardians' AoE attacks, as they can be devastating when stacked. Finally, with a boss in every room, Resurrection Signets are recharged often.

Pairs of Temple Guardians guard each door and can be pulled without aggro to nearby afflicted. A mix of afflicted monks, ritualists, and rangers reside in the center along with the mesmer hero, Kitah. It helps to kill Afflicted Ritualists first to keep them from resurrecting and healing their allies.

This room has three pathways. The center contains the necromancer hero, Naku, along with Temple Guardians while the other two contain afflicted. Each group can be pulled separately, but it can be tricky to keep from coming into aggro range of others. It is easiest to pull one or more temple guardians from the center, then the mobs on the left fork, and then Bound Naku. The mobs on the right fork do not need to be cleared. Soon after defeating Bound Naku, they will move to the center of the room, so it is best to save him for last and then quickly proceed to the exit.

Walkways surround a pitted courtyard in this room. In the pit, a group of mainly necromancer and warrior afflicted are led by the elementalist hero, Teinai. All of the afflicted save a single monk are grouped together, so it is very difficult to separate them. If you come to the nearest corner of the square path around where the mobs spawn, most of the afflicted will come up to attack you. This makes it easy to clear them before aggroing Teinai. When facing Teinai, be very careful, as Sliver Armor may kill anyone nearby in seconds and Star Burst can cause a massive spike on the unwary. However, since all of Teinai's skills require her to be in close range, this can be negated by using snares and relying on ranged attacks.

Temple Guardians stand between the gates and a raised platform populated by afflicted and the monk hero, Karei. There are several separate linked groups of mobs, so you can pull and kill only a few at a time. It is best to pull mobs from the east, i.e. towards the exit gate. This is because the spirit of Karei (which spawns on the platform, not where he was killed) will run east and can get stuck on any living mobs, which you will then have to pull anyway.

Afflicted warriors, monks, and elementalists guard the warrior hero, Jaizhanju, in this room. If pulled, the afflicted warriors will often be out of range of the monks towards the back. The main danger is the group of three afflicted elementalists that can cause heavy amounts of damage if their fire is concentrated. There are two exits to this room, both guarded by a small group of afflicted. It is advised to kill both groups before moving on; otherwise, the untouched group will run into the next room, making the following fight much more difficult.

Oriented similarly to the fifth room, the danger of this room lies in the patrol of Afflicted Elementalists marching around the ritualist hero, Kaolai. They will often spike the same target; a high armored warrior or ranger (as it is elemental damage) should attempt to draw their initial volley of spells. A pair of Temple Guardians and another elementalist guard the exit gate and are easily aggroed during the battle. Once you come near, all of the afflicted will scramble around and come to the base of the stairs, but they are not all linked to each other. All afflicted should be cleared separately from the Temple Guardians and Bound Kaolai. Also keep in mind that Kaolai casts the Restoration spirit, acting as an AoE resurrect to all nearby foes when it dies, including Kaolai. Be sure to eliminate it first, or better yet, don't attack it at all.

The final room is a circular rim connected to a central island by four bridges. Each path is guarded by a pair of Temple Guardians, and Afflicted Rangers patrol both clockwise and counter-clockwise around the rim. These rangers will go into the center when you do. In the center, several groups of afflicted led by the assassin hero, Vizu, await. To finish the mission, all afflicted on the central island and Vizu must be defeated. It is not necessary to clear all of the Temple Guardians or patrolling Rangers. It is best to clear a bridge to the center then pull only a few at a time. If you take on too many at once, not only can you get overwhelmed, but it can actually be slower with several afflicted ritualists and monks healing whichever mobs you attack. Should assassins wish to capture Vizu's elite, she needs to be defeated before the last afflicted is killed.

Getting master's reward with only henchmen is doable but can be tricky, as henchmen are rather short on firepower. With heroes or multiple players, it is much easier. The two basic approaches to master's reward are either careful pulling and leaving the mobs that aren't necessary to kill, or else bringing overwhelming firepower from heroes and blowing up everything without pausing to pull.

The master's reward timer starts about 20 seconds before the timer of how long you have to save Vizu before mission failure. As such, to obtain master's reward, you need to complete the mission with at least 18:20 remaining on the visible timer.

A ranger's Edge of Extinction spirit can help to quickly mow down the Afflicted. A couple of deaths is usually enough to get a chain reaction going. Be aware, however, that use of this spirit can prove counter-productive if there is a minion master in the same group.

The afflicted will bunch together quite a bit, making them easy targets for area of effect attacks.

A majority of the damage during this mission is Fire damage, making Ward Against Harm, Mantra of Flame, etc. very useful.

This mission is mainly about careful pulling to dissect the various groups of afflicted. The mobs come in only very small linked groups, but it often is not at all obvious which are linked to which others. Because careful pulling is of such paramount importance, it can be useful to eschew melee entirely, though obviously this is not an option for some classes. At the very least, any melee characters will have to be careful not to chase mobs and aggro more, even if it sometimes means standing there doing nothing. Bringing Minions is especially catastrophic.

Mobs cause both blindness and dazed, so it is important to have substantial condition removal available. Because both the Afflicted Elementalists and Temple Guardians use fire spells, it can be useful to have a water elementalist with Ward Against Harm. Pulling may sometimes require going into range to get blasted by several elementalists at once, and Protective Spirit is sometimes insufficient defense against this. Either Shield of Regeneration or Spirit Bond work better to protect a puller.

Rooms 2, 3, 4, and 6 can readily be cleared as above. If the third room gives you trouble, you can run to the corner, then run back all the way out of the room, wait for some afflicted to leave, and then grab the ones that hang around longer.

In the first room, you'll want to pull apart the wandering mass of afflicted somewhat. Try to get the Afflicted Ritualists in as small of a group as possible, as spiking them down can take some time. It is particularly useful to pull the two ritualists in separate groups.

In the fifth room, keep most of your party at the top of the stairs while one member heads down. Get kind of close to something but not within aggro bubble range, then run back up the stairs. All of the Afflicted Warriors in the center of the room will then chase you up the stairs, together with possibly some of the Afflicted Monks. For the next pull, grab an Afflicted Elementalist and they will all come. After this, clearing Bound Jaizhanju and any remaining monks is easy.

In the seventh room, as soon as you get close, all of the afflicted in the room will scramble around and then come to the base of the stairs. Trying to fight all of them at once can be a big problem. Instead, shoot one and run, and keep running until a few follow and the rest don't. Kill the ones that follow and repeat. The puller will probably need a powerful defensive spell here. It can also help for someone with hex removal to stay a little behind the puller and clear the slowing hex Kitah's Burden when the Afflicted Mesmer casts it, so that the puller can get away. Mhenlo and Togo will follow the puller away provided that he is not slowed or killed, though the puller may have to run past the rest of the party somewhat to get them to follow adequately. In some cases, you may need to run all the way into the previous room.

In the eighth room, once you go into the middle area, all of the Afflicted Rangers wandering the perimeter will do likewise. As such, it can be better to clear them first. Pull a few mobs at a time out of the center, making sure to pull them far enough that you can chase enough to kill them without aggroing more mobs even if they run away a bit. It can help if you don't get both ritualists on the same pull.

Start of the mission: