Really? How interesting. I've drawn up a R/P barrager build I'll unleash when NF is released ( and hopefully we've made some way in the untested builds section). Combined with an A/R crit barrager.... Now all we need is pets and a way into the tombs ;o).--JP 16:49, 4 October 2006 (CDT)

That's good that this NPC has at least a little AI to work with. Dunkoro failed *miserably* as boon prot and RC prot. -Auron

She could even do the R/N Touch Ranger build! Never tought that...however she had an axe, so she had to go in melee, but it worked. now that's some AI =P --

Heh? A touch ranger is a very simple build to play. The AI will play it like any other build attack build. --Ab.Er.Rant

would it be possible to get her a pet? --Fiz

My jin seems to be SOO much more aggressive than any of the other heros. I have tested this side by side with margrid, same build and all, and she always seems to rush into battles, over aggro, fall back and attack again while i am trying flee (even if i change her orders to avoid combat), etc. Has anyone else noticed anything like this? —The preceding unsigned comment was added by 61.180.231.2 (contribs) .

Did you check whether you've got her in Fight/Aggressive mode? --Ab.Er.Rant

I have noticed that as well. Jin goes out of her way to use...say...Leech Signet or Power Drain if there's another fight going on and I'm just peacefully observing. While it's not quite pulling in the aggro, the only other instances I've ever had Heroes move undesirably is when Dunkoro or Tahlkora want to cast a Hex/Heal/Condition removal on some hapless NPC. Perhaps Jin is just an angry sort of person under that cold exterior. I like her anyways, crazy interrupt reflexes. ;)

My observations mirror that. When I'm calling targets for my heros if I tab to the next target too quickly and it's in another mob outside aggro range and call it and then move backward, other heros in fight mode will back up and back off (like Koss) but Acolyte Jin only wants to hear the call to attack. She rushes forward unless I actually run a larger distance away or flag her off. Shadowlance 22:15, 30 March 2007 (CDT)

I totally agree- Acolyte Jin is mental. For example, I exited the Marketplace, and Acolyte Jin immediately ran towards the group of three Jade Brotherhood, who were WELL outside of my agro circle. All I can say is that I'm glad I gave her Whirling Defense. Still ended up with -60 dp though. Leeroythefeared 11:16, 12 July 2007 (CDT)

That's weird... never seen that before. Did you set her to Guard? --Ab.Er.Rant

She also usually starts with a long bow, which means she has a much larger range to attack a target thus she would engage sooner than your other allies. Putting her on defensive mode or giving her a bow with a shorter range would probably address this issue. ---- 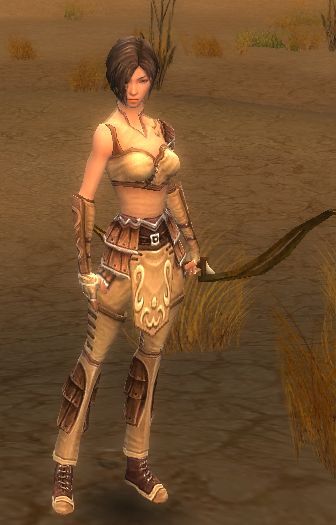 Do we maybe have one and the same person there?--

Aside from them using the same bow, I don't see why you think they're one and the same. --Ab.Er.Rant

Both are called Jin? Both use the same Bow, and both seem to have a very similiar face...and both are canthan.--

I was expecting a more detailed explanation of a stronger and more concrete connection. But since you can only point out the obvious similarities, then you've just refuted yourself. First, they're of different consecutive campaigns, and hence, created by a different team, at least 6 months apart. Jin is not an uncommon name. And if you look at Canthan names, there are several that have been reused before, likely without any attempt to indicate a certain connection. And personally, they don't look the same, the shape of the eyes and lips are different. But if you'd go and take a look at Canthan skins, you'd find that there isn't really alot of variations that you can come up with. But those are subjective, so let's bring up lore. Acolyte Jin grew up in a small village on the coast of Cantha. If it was on Shing Jea Island, it would've mentioned the island. Her history from both the official lore and quest dialogue, and the quotes she has in Nightfall, does not at all imply or resemble someone who would consider joining the Crimson Skull. Jin the Skull Bow has a unique bow that Acolyte Jin doesn't have. Jin the Skull Bow is a with a group of bandits who ambushes people. Of the two Core skills that Jin the Skull Bow has, Acolyte Jin has only one of it. These are my reasons for not agreeing with you. Not very strong reasons either, but I would say lore reasons are stronger than names and skins. --Ab.Er.Rant