Has anyone else seen the ghost in Ashford Abbey when you're looking in from the outside? It would be next to the statue on the far side of the town. Wierd! | Chuiu 20:52, 14 January 2006 (UTC)

I had noticed it before, but I thought it was just the Avatar of Dwayna. I just checked now an it definately isn't. Looks kinda like the Avatar of Grenth crossed with Ghost.
Here's a pic: 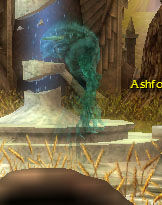 Hmm, never noticed that before. It's the same Graphical model as the Banshee, Mragga and the Wailing Lord. Mragga is a demon while the other two are more like ghosts/apparitions. No idea what it means. --Karlos 23:54, 14 January 2006 (UTC)

You can get a closer look than that if you go around to the side of the fence and view it from a different angle. It looks like a wraith with a different color scheme. EDIT: Well I guess not a wraith, it is like a banshee. | Chuiu 05:30, 15 January 2006 (UTC)

D=dye, Ar=armor. Yeah very wierd and since u cant target it even it being listed as an npc is wierd

Um i tried the exit bug thing and i just could not get anywhere close to the gap before portal sucked me in. U are talking ashford abbey to catacombs right? If u cant explain anybetter my IGN: Justices Spectre Thankyou :-)

Tested this again and it seems to have been fixed recently. Removed the bug notice from the notes section.Glamtre 19:44, 21 March 2007 (CDT)

Another interesting note about the "haunting spectre", the prima guide lists it as a Monk. D.Ar still makes no sense to me.--

K the only offhands i have seen him spawn with look like the healing ahnk or surprisingly a nightfall monk one...like the one that dunkoro gets by default. it really is hard to tell though. Ok the D. Ar. in the prima guide was an attempt to say what types of things a monster will drop. Like all monsters should have a D for dye. However not all monsters drop armor (Ar). So white mantle would have D.Ar. but an aloe seed may just have D. Make more sense? Its wierd since u cant even target the ghost but yeah maybe at one time it was a monster...you know the one that ate sarah during the searing? lol just kiding. Vote if you think its Mraga the Souleater, the necro boss during the last 15 att point quest of the prophecies campaign. —The preceding unsigned comment was added by 69.4.97.132 (contribs) .

Reason he was put there[edit source]

I think he was put there having something to do with this: "Situated just outside of the catacombs Ashford Abbey is the resting place for many of Ascalon's most distinguished deceased citizens." But thats just my thought, hes a ghost of a dead ascalonian. - 69.248.175.25 03:50, 7 November 2007 (UTC)

That must've been one FUCKED UP ascalonian then, cuz he definately doesn't look like a human ghost.--