Contrary to what the name implies, Bone Dragons are not Skeletons:

Eh, where is this Bone Dragon that is "just outside of ToA"? I'm already too lazy to keep re-doing Sanctum Cay to test the Executioners right past the initial fire imps... If anyone has an alpha account to lend me so I can turn on God mode, that'd make everything go at least 10 times faster... -PanSola 09:07, 8 January 2006 (UTC)

There is a group of one Bone Dragon along with a few Skeleton Bowmasters very close to ToA, in eastern direction. You can't miss it. Exit ToA, turn left, hold down CTRL, walk a few steps and you should see it. --Fisherman's Friend 11:01, 8 January 2006 (UTC)

It's possible that rounding errors caused the variations.

In the mean time Edge of Extinction reports Bone Dragon and Skeleton Bowmasters to be different types of creatures. -PanSola 12:31, 8 January 2006 (UTC)

Do the Sanctum Cay / Black Curtain / Riverside Province bone dragons use this skill? Or was it only the four that defends Rotscale in Majesty Rest that has since been replaced? -User:PanSola (talk to the

Yes they do, I have a screenshot of one in Sanctum Cay using the skill.

I'm doing Sanctum Cay at the moment, and I think that the bone dragons have an AoE disease effect when they die. Can anyone else confirm this for me? Thanks ~Avatarian 86 12:23, 7 May 2007 (CDT)

Did a little bit of testing, and the disease part doesn't seem to be tied to deafening roar or when the bone dragon dies. I think it's just something about being close to the bone dragon. ~Avatarian 86 10:07, 9 May 2007 (CDT)

Bone Dragons cause Disease when you stand near them no matter what mode; nothing to do with when they die. And, yes, they attack ranged or else Choking Gas would be useless. 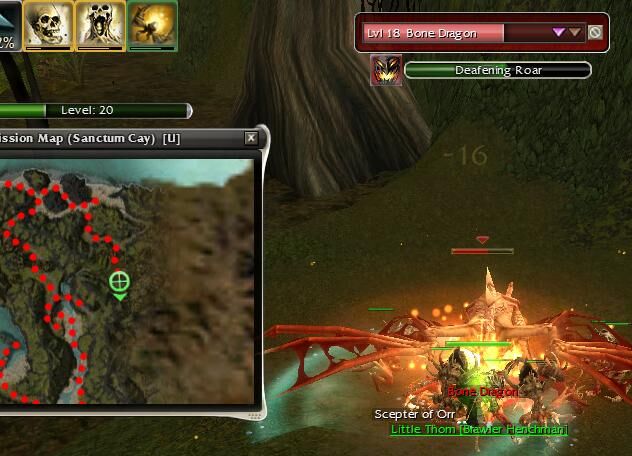 This one is in Sanctum Cay so it confirms three things in one SC. Yes - all Bone Dragons use Deafening Roar. Yes - they cause Disease when you stand next to them. And yes - they are fleshy. :)