Wich person sacrificed himself to use a black dye on a bone staff? O.o --SigmA

Dye preview works for weapons, too. --

Oh, nevermind, I see, the image was uploaded when the preview wasn't implemented yet. --

Hey, as long as they wanted it black at the end, what's an extra plat for a bunch of dyes before that? If you're dyeing anything black, you can afford to throw away plenty of all the other colors. =) — HarshLanguage

but it should probably be clarified what order the mass of pictures are in. Incidentally, does this skin drop in GW:EN? If so, how does that work out when it comes to dye? -->Suicidal Tendencie

A Charr Ashen Claw wields a Bone Staff with mis-aligned "eyes." The glowing green dots seem like the staff is supposed to be longer to match, but was down-sized somehow. 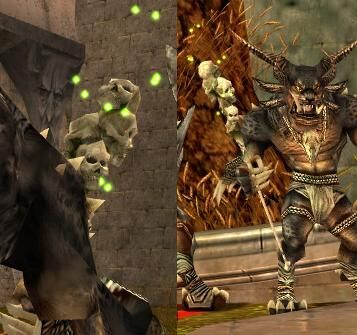 Happened with one of my characters, too lazy to find the screen though.

Shido, you said it happened to you. Was it also a charr, or was it your actual character wielding the staff? RoseOfKali

My character. Also dang, I can't find it. Must be on a different computer. I'll have another look later.

Does your character happen to be really really short? Like a mini-monk? :P I think the deal here is that the weapon itself scales with the character size, but the eye coordinates don't. Maybe not. Still weird. RoseOfKali

Powersurge, no offense, how did you not notice that? That's fairly well known, if you get CoF runs, always look at the 2 Charr that give Dread Masks and Blindfolds. It's easier to observe when they're not busy trying to eat you. -->Suicidal Tendencie

Tbh, I never noticed this, nor have seen anyone else commenting on it, and I've done a couple dozen of CoF runs. ---

Ok, so PA's/etc aside, apparently this is a known widely-spread issue, but does anyone know exactly when it does or does not occur? RoseOfKali

I'd imagine always. It only affects some skins (obviously...) and I see no reason why this would not always occur. I've never seen "large" creatures with a Bone Staff that did not exhibit this pattern. The Smiting Staff is the exact same. The glowing spheres of light to the Smiting Staff are what the green "eyes" are to the Bone Staff. I'm fairly sure I've seen other skins do the same but none come to mind atm. -->Suicidal Tendencie

Go-go Anet vectorfail... I wonder if this works on Jora and Vekk. :P RoseOfKali

The what staff? :P RoseOfKali

So what does it look like (is there a green?) and why do we not have an article? RoseOfKali

The staff comes with halves casting time of Death magic spells 20% then I added a perfect adept staff head, so now it has two halves casting time. Does one not work, or is there now a 40% chance that the casting time will be cut in half. I understand how it works on a focus, but I am wondering if anyone has done any research on a staff.

Basically, you have about 40% chance to half casting time, and 4% chance to quarter, iirc. In any case, both work, and sometimes you do get the bonus to stack, the percentages may be slightly different, like 36/4, I can't remember for sure now. RoseOfKali

Thank you both for the information. I had thought it would either work like you said, or that it just wouldn't work at all. I am glad to see that it works like you said. That at least gives me a 1 in 3 chance of having it halved. I am curious why more people don't go with these mods, it seems that having a good chance at spell time halved would be much more valuable than the usual +5 energy I see most people use? Thanks again to you both.

Well, it greatly depends on the attribute of the staff. These mods work well for animating minions (The Nightbringer), as well as other slow casting attributes, like many Elementalist spells or Curses. The effect is not as noticeable for quick casting skill bars, so many people prefer the extra energy. Another popular option is having a "40/40" wand/focus set, which has the same effect on both casting and recharge time. That is what I like to use for Curses, and use a similar setup of Dunshek's Purifier and The Stonehart for Healing and Hajkor's Flame and The Kindlerock for Fire Magic, which are known as "40/20/20" or "40/20/+1" sets. Staves, on the other hand, are most commonly used for their Enchanting mod, and by perma-sins and trappers, who use them for the ability to have +20 energy with no regen penalties and attribute investment. This should also probably be moved to Staff. RoseOfKali