This skill is killing my 55 efforts. Any ideas why? It kills 55 build instantly. doobnoob

Maybe the dervishes are also using something like Rending Aura or Intimidating Aura. What damage numbers pop up when they hit you with this? --Crazytreeboy 19:48, 16 January 2007 (CST)

I love this skill. Great in PvE. You don't even usually have to "end" with it, as you would think. Many mobs will have less health than you at any time. Worked wonders durring the Nightfall WPE.

Also, if too be used in PvP (even PvE) cast Vital Boon on yourself for the maximium health increase.

Does that mean that if you hit 3 foes with less health than you in one sweep that you do +153 to each of them? or +102 because it's adjacent to the foe rather than adjacent to you? or does it only trigger once cause it's weird? I really wish they'd come up with standard descriptions like Wizards of the Coast have with Mtg. Echokin 23:01, 25 October 2006 (CDT)

*range is nearby instead of adjacent, which can be seen in the second half of the screenshot: fixed --RolandOfGilead 08:35, 29 November 2006 (CST) 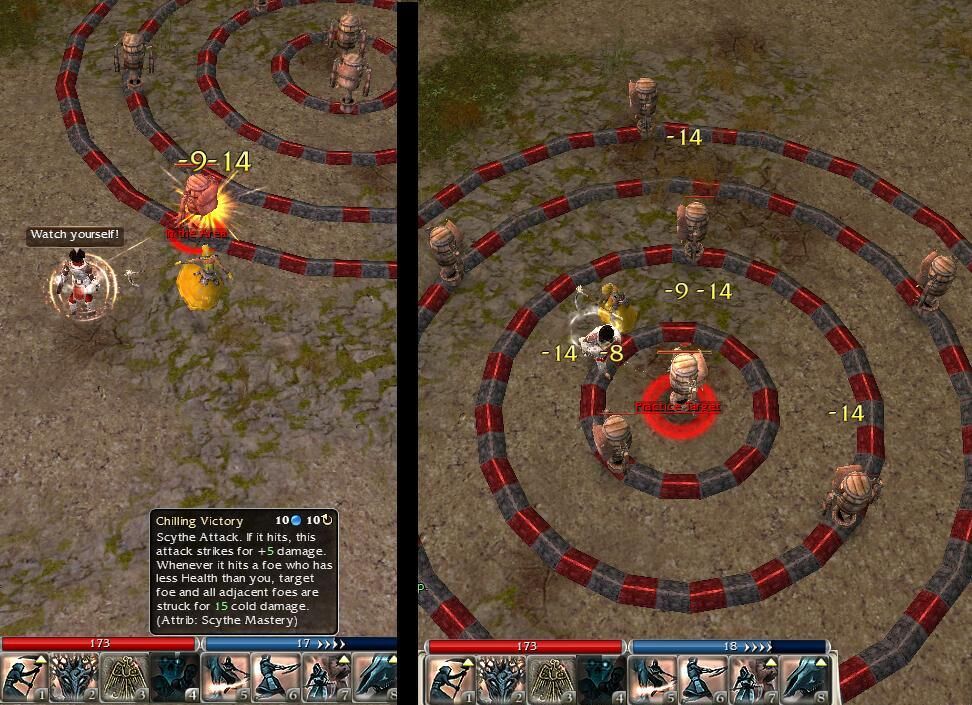 "The description is a little confusing, the adjacent foes means the foes adjacent to your target, not you."

Removed the note as it didn't make sense; the description of this skill's behaviour is consistent with that of other targeted AoE skills. --RolandOfGilead 08:35, 29 November 2006 (CST)

If you hit 3 foes adjacent to each other with this skill will the aoe effect trigger 3 times for each foe you hit or only once?

I think I noticed a bug on this skill, but I'll confirm later. The description says "Whenever it hits a foe who has less Health than you" you hit for cold damage. However, I believe it always hits for that cold damage. I remember being Blinded and using this skill, missing my target, yet dealing some damage. Also happened when the attack got blocked (guess blocking counts as a "hit" anyway, so I think it's ok) and when it was evaded. I'll try to confirm it later on, if anyone doesn't do it first. KazDoran 08:33, 30 January 2007 (CST)

Since it deals damage when blinded too, it can damage anyone under the effects of shadow form. pretty obvious I guess... Would work pretty good using along with sand shards when blinded Yaki 14:31, 2 March 2007 (CST)

Only works on target[edit source]

There is another bug in this skill: It only deals additional cold damage if the target's health is lower than yours. I tested it with Cultist Milthuran and his friends, the Luxon Outcasts:
I had the aggro of the whole group (4 foes) on me. The Outcasts were almost dead while Milthuran wasn't. I used this skill on Milthuran who was at 2/3 health. I hit 3 foes (with the Scythe, of course). --

I really doubt that this is a bug, i believe it was intentional. I mean honestly, 180 cold dmg + scythe dmg + 20, isn't that just slightly overpowered?

Think about it. It says ""Whenever it hits a foe who has less Health than you, target foe and all adjacent foes are struck for 15...51 cold damage." This means that for EACH for hit that has less health then you, it would make that AoE cold damage. If you hit three foes that had less health than you it would be (using 15 scythe) scythe damage+3(20)+9(60)= about 600 damage. This would be spread out over 3 foes, but it would still be powerful. I don't think Anet wants that kind of insanity. --

"Whenever it hits a foe" means it should trigger 3 times if you hit 3 low-HP targets, and only trigger on hits, not misses. It's an anomaly.