no, there are probably 37 articles using the combat-stub template, that was recently invented I believe. -SolaPan 09:01, 20 March 2006 (CST)

Ok, I've put something in there that absolutely says nothing in the context of the combat-stubs. But since it means something totally different from the "combat" in skill descriptions, I am not going to keep it as a redirect (which was what I originally did to the article). -SolaPan 09:18, 20 March 2006 (CST)

Very good question, and I have no answer to most of it. I think there IS a reason for a "combat" article to exist, so people looking up that word when it occurs in skill descriptions can be directed to Attack. But again taht's a different context than this Combat-stub business. -SolaPan 10:12, 20 March 2006 (CST)

If only the two "failure" skills use the term, then I don't think it's worth explaining. "Combat" has no meaning in those descriptions. You can't attempt to hit something outside of combat. There is no distinction being made. I don't think the descriptions would change meaning even if "in combat" was dropped from the skills. Are there other skills that say "combat?" --68.142.14.69 16:48, 20 March 2006 (CST)

And Life Attunement is probably the most important reason we want to make sure the meaning of "combat" is clear too. ie it doesn't include spells or other offensive non-attack skills. -SolaPan 16:56, 20 March 2006 (CST)

The following is the full list of skills have "combat" in their descs as of today: Life Attunement, Price of Failure, Spirit of Failure, Vengeful Was Khanhei. HTH — Stabber 18:47, 20 March 2006 (CST)

"Hope That Helps", actually. I don't suppose any of you are old enough to remember the Usenet group alt.fan.warlord? — Stabber 20:38, 20 March 2006 (CST)
How about Send out a Lightning Orb that strikes target foe? I can probably pull out more than a dozen non-attack skills that use the verb "strike" in their description. -SolaPan 20:39, 20 March 2006 (CST)

PanSola just directed me to this discussion. I was the one who created the combat stub category during my crusade to put all stubs in the correct categories. I also put the link to the page 'combat' in the combat stub template, but I totally forgot to make the page itself as I was moving the stub articles to the correct categories. The page combat is imho needed, although not really because of the skills that use the term. I was unable to find a page which describes combat in general (listing things that happen during combat etc), but if there is one, the link in the stub template should be changed.
A few things we should have in the page that tell about combat in general: List of things that make a player to be part of combat, mention that you only get xp or loot when in combat with the monsters, skills used when in combat vs. skills used when not in combat, ... User:Gem/Sig 20:24, 20 March 2006 (CST)

Experience describes when you get XP, though I don't know if anywhere explicitly mentions the area to be in to potentially get drops assigned to you. There's no such thing as skills used in combat or out, just skills that target enemies or not. In other cases, "combat" (as you seem to be putting it) is basically the game itself. --68.142.14.69 20:30, 20 March 2006 (CST)

I still think we need the article, even if it wouldn't have a lot of stuff in it. Being in combat also affects things like identifying and salvaging stuff. I know that the xp thing is listed in the xp article as I added it there, but it should still be mentioned here, as not everyone will propably find the information there. (And the skill thing ment that we should describe which kinds of skills cause you to be in combat and which don't.) User:Gem/Sig 20:36, 20 March 2006 (CST)

I've thrust my ego in the way of the truck that is Wiki Editing, and attempted to put something basic up. I can only imagine I've missed all kinds of things that people think should be in "combat", but better to have something for people to mess with than nothing at all. Hopefully nothing there is too horrendously wrong. =) --JoDiamonds 06:09, 21 March 2006 (CST)

Good to see that people took this seriously and started to gather new information that no one had before. I hope we can present it all in a nice manner (table or something). I will help with this as much as possible. User:Gem/Sig 16:41, 21 March 2006 (CST)

I wonder if it is true that you cannot regain health while in combat. I'm off to test it with the Master of Axes and Mist Form. My understanding is that you simply have to not have taken any damage or degen hits for a while for the natural regen to kick in. Category:Research needed — Stabber 06:25, 21 March 2006 (CST) 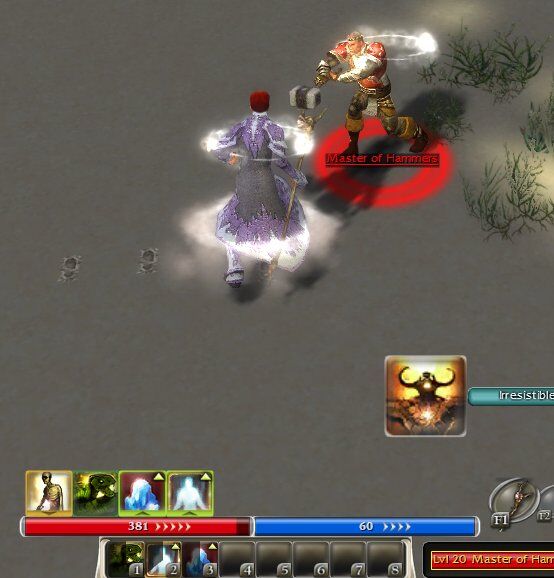 What a great question!

I think it also ends when you use a stance. I know when I use Mantra of Flame on my Hydra farming build that it stops my health regeneration when I'm running to the next group of hydra. - Greven 07:50, 21 March 2006 (CST)

Just tested that. Wow. I could ID in both cases. :) I think IDing (and salvaging) is suspended when you attack and is re-enabled after you stop attacking with about 10 seconds or so. I think it is independent of health regen. --Karlos 08:25, 21 March 2006 (CST)

So, with Id/Salvage, we have a pattern consistent with the strict "attack" definition of "in combat", whereas "no natural Health regen" is a separate thing. Next thing to check:

Okay, it's better, but I just went out and checked- the last remaining thing you can't do while "having fought recently" (being unable to drop items) doesn't actually happen (not any more anyway). If it doesn't actually mean anything any more, should we maybe remove it from the page? Or should we document how it used to work in the past or something? Is there something it affects that simply isn't listed? I can't think of anything off the top of my head....—Aranth 18:23, 26 March 2007 (CDT)