Someone posted an image of a NPC in the factions weekend event talking about the legendary HoD swords (and talking about having them and selling them :) ). Does anyone remember the location of this image? User:Gem/Sig 21:04, 27 March 2006 (CST)

Just what I was waiting for. Not that I really care. :) --Gem

I have to say that the image for the sword is quite bad. I focuses more on the wielder than the sword. Could it just be replaced with the short sword image as they have the same skin?--Coloneh 21:09, 7 October 2006 (CDT) 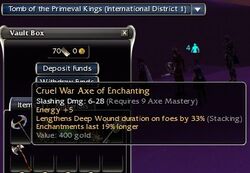 I've just got this from a phantom chest in the tombs of primeval kings. I didn't know those were dropped anywhere in Tyria, but I guess now they are. Foo 23:24, 12 March 2007 (CDT)

I saw somebody buying one of these for 3000 ecto. wow. I guess they are still up there!