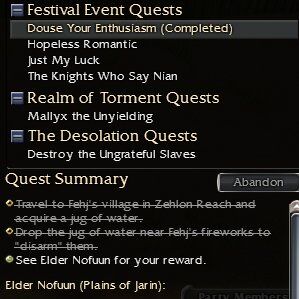 -- yeah, or might be the actual phrase the show's name is based on that has been around a lot longer.

In German the quest title is "O heiliger Sankt Florian". This means "Oh holy saint Florian". This sentence is one half of a little joke prayer, which is connected to Saint Florian who is consiedered to be the saintly protector for fire damage. The second part of the saying goes "schuetz mein Haus, zuends andere an" or the meaning in English "protect my house and fire the other one". My conclusian: nice way of translating a joke properly in another language. As a German speaking player, this joke has immediate meaning as a joke done by the programmers or designers. Very well done. I just don't know, how to put this in the official page of this quest. Additionally there might be other localisations in other languages that would be valuable to be placed here. I am trying not to rush the German special before some other language versions are known. Michael57 05:05, 17 February 2007 (CST)

But you say the German title of the quest is the joke. They didn't translate the English title to German. ANet has a German team for the German version of the game and they come up with native German wordplays and allusions themselves. Wiking 14:45, 19 February 2007 (CST)