Wait a second. That means you can use this skill to literally MOVE spirits as you move your character? That would essentially make spirits into minions that do not have health degen--Life Infusion 11:35, 4 April 2006 (CDT)

Yes, it teleports a spirit to your current location. As far as practical uses go, it is rather limited because the spirit has to be in your magic radius when you cast the spell. So you can move a spirit a distance of half an aggro circle and a little. In PvP, it is theoretically great for pulling a spirit out of AoE, but it is too early to tell if this will see a lot of use. There are, of course, some important questions to answer about this skill:
Esan 11:47, 4 April 2006 (CDT)

Actually I was thinking of this in prior to use of touch range spirit skills (so you won't have to move) or skills that depend on spirits around you (spiritboon strike comes to mind).

That sounds like a PvE tactic, at best. In PvP you'd have to be extraordinarily lucky (or facing a clueless opponent team) to pull more than one spirit to you and follow up with SBS (which has a 2 second cast, i.e., "easily interrupted"). Hmm... on second thought, it might be possible with some of the more esoteric rainbow spike setups. Or even an SBS spike team with each spiker having a pet spirit (maintained with Soul Twisting)... Esan 12:12, 4 April 2006 (CDT)

The easiest usage that comes to ming is: Pull your EoE spirit behind you instead of the old bait of rushing in to get IWAY and Ranger spike teams to lay down their spirits then pulling back. Now that tactic is useless really since they will just draw their spirits behind them. And yes, the spell pulls nature spirits too. --Karlos 12:19, 4 April 2006 (CDT)

I highly doubt that's going to be effective unless Draw Spirit can negate Signet of Creation. Otherwise, every spirit and animated minion has a max lifetime of 30 seconds. Why drag something behind you half aggro radius at a time when it will probably die by the time you get to the desired location? Esan 12:27, 4 April 2006 (CDT)

It may be useful in PvP to draw Destruction into the battle and destroying it with Rupture Soul. --Thervold 15:58, 8 May 2006 (CDT)

What happens if you cast this without explicitly targeting a spirit? Does it draw the closest allied spirit to you, just like Taste of Death steals health from the closest minion? F G 14:12, 4 April 2006 (CDT)

I used it with an enemy targeted and I started running towards the enemy. Also, it works on ranger nature rituals as well, but is bugged. It will move the spirit but not the effects of the spirit. I was moving an allied Favorable Winds and the effect disappeared from the effect monitor after moving out of range of the original position it was in. XT-8147 23:52, 9 May 2006 (CDT)

Investigated this. If you cast it while targeting a foe you start running towards the foe. However, there's a workaround if you don't want to target your nearest spirit - simply hit V and target any party member! The nearest spirit will be drawn to you. Adding this shortcut to the article now. Kessel 23:00, 1 July 2006 (CDT)

I use f, as that targets yourself. You'll have to make sure you're in range though. It's a very fragile and frowned upon thing to do, but running near a bunch of them, draw your destruction, and then using rupture soul (and then getting the ---- away) seems to be an obvious use for the skill. Silk Weaker 04:44, 16 July 2006 (CDT)

I took a screenshot that clearly shows that Draw Spirit is not working how it should be. 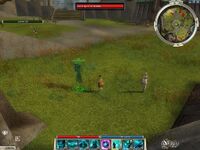 Seeing how the character is standing next to a Spirit of Shelter, they SHOULD have the effect of it on them, however they do not. The blue dot shows where the spirit was created. --Curse You 00:18, 16 September 2006 (CDT)

Indeed, you're correct. In Fort Aspenwood, for example, one could place their spirit somewhere more combat intensive (outside), and just pull the spirit inside. Haven't tested this, but I believe it doesn't work on Destruction, as the when the spirit dies it triggers the damage based on where the actual physical spirit was located. (Death Trigger, whereas the others are Passive Triggers on creation). --MadCat 17:47, 21 September 2006 (CDT)

It WOULD work, but it's hard to make it worthwile. Any spirit that needs a target would fail, Preservation and all attacking spirits. And the spirit would have to survive long enough to be worth it anyway, which shuts out Earthbind and Shelter, and worth targeting for the enemies, so something like Union isn't very valuable either. Eyup. Maybe some of the new spirits will work with the bug, but right now I can't think of anything worth hiding. --Crazytreeboy 18:09, 21 September 2006 (CDT)

Does Not Destroy Enemy Spirits[]

I used this in PvP (to make it less nessecary to have the team lure enemies to the spirits) and I found that I could draw a spirit right next to an enemy spirit of the same type with both of them remaining alive. I would like to test this again with both offensive and defensive spirits, but I thought it was interesting. JediRogue 22:54, 1 October 2006 (CDT)

You don't seem to grasp how spirits work. You can create a spirit (Frozen Soil for example) while the opposite team has the same spirit up, however, both spirits will remain. As well, Draw Spirit doesn't work the way you seem to think it does (look at stuff above this topic). --Curse You 20:56, 2 October 2006 (CDT)

You dont seem to grasp HOW TO READ. A section in the article says "teleporting a spirit with the same name into range of another one will cause the teleported spirit to die".Unless you mean about it not destroying opposing spirits. It destroys allied ones. Aarkshark 18:57, 18 December 2006 (CST)

The original two comments are two months old, but the first poster clearly implied that he thought that allied spirits would replace enemy spirits due to the "one of each type in range" restriction. --Fyren 19:03, 18 December 2006 (CST)

So, after all this time, this was still in the teleport qr, while it's actually a shadow step. I tested this today in the Great Northern Wall mission. Enter mission, don't talk to captain (this keeps the gate closed), go down the stairs, cast spirits, necrotic teleport to a dead devourer (killed by guards), then use Draw Spirit. The spirits will stick to the gate, but will not pass through the closed gate, just like a standard shadow step. Works the same with Summon Spirits. I've changed all the qr's and stuff, but just wanted to let you all know exactly how I tested it. RoseOfKali

Thanks. I think I got them all, but this is not something I'm used to doing, so I'm not sure. :P I also submitted it on GWW skill bugs page. I'm guessing it's just an erroneous description and the skill works as intended (like Swap and Summon Spirits), but you never know what Anet was thinking, this is still severely underpowered vs Summon Spirits. RoseOfKali

(PS A lot of people new to multiple Rits don't know the mechanics of when Toon B can cause Toon A's spirits to die. I don't think this article needs to be the place to explain it.  —Tennessee Ernie Ford (TEF) 21:51, August 15, 2010 (UTC)