They we're portals a long time ago in the WBE. http://jerrith.com/GW/default.htm If you're interested, you can seek out where the portals led to.Jelmewnema 14:50, 23 June 2007 (CDT)

Those "portals" have always been there for as long as I can remember and there's numerous ones throughout the map, even in the middle temple area. Just part of the Flame Temple; nothing more, nothing less. Gravemind 16:29, 27 July 2007 (CDT)

Generally, the definition of a "portal" implies an entrance to a means of travel between one location and another. While the glowing swirls are no doubt the same animation as zoning portals, their purpose is simply aesthetic.--Gravemind 13:30, 18 August 2007 (CDT)

There is no Mars..[edit source] 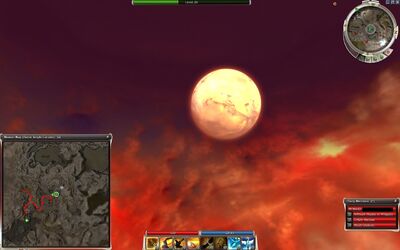 Here's a screenshot taken while standing directly at the Charr alter (where lady Athea's ashes were). What appears to be another planet, possibly Mars, though I don't know enough about it to say whether or not is is Mars.--ZenonSeth 11:54, November 26, 2009 (UTC)