If you want to read about the fighting that took place here, please see /fighting. Warning: it's really sordid stuff.

Wow, that's an odd yet cool bug. I was doing a cap run in Perdition Rock with some henchman just a while ago. Some of those Hydras ambush us and killed all the henchman and every single time they died, they dropped about a sack of 93 gold! If you don't believe me, go try it out!--SavageX 21:08, 15 June 2006 (CDT)

Me and all my guildmates across both expansions are seeing it. Also seeing the monsters kill each other and drop loot. --Gares Redstorm 21:23, 15 June 2006 (CDT)

I did a little more research on this bug and discovered that your henchman only seem to drop money only after you gained some dropped money. I first went after a bunch of hydras and flesh golems without getting any money drops and they didn't drop anything. After I got a money drop of 107 gold from one of the monsters, I tried again with another group and the henchman started dropping sacks of 26-27 gold each.--SavageX 21:25, 15 June 2006 (CDT)

Now, I know we're calling this a bug, but how do we know that it wasn't intentional? True there is no mention of it in the update notes, but it isn't like they haven't changed things before and not mentioned them. It seems to me that there would be no reason for the game to track how much money the henches have accumulated, so why would there be anything for them to drop if it wasn't done on purpose? --Rainith 11:19, 16 June 2006 (CDT)

While I'm staying the @#$% out of the arguement above, something is definately up in Majesty's Rest: 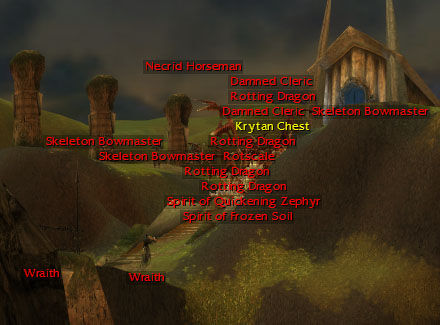 Just got me and my henches @$$ kicked. The dragons were bunched on the stairs and because of the location I wasn't able to actually attack them with melee attacks. When you get close a few Damned Clerics appear too. I'm heading to ToA int if anyone wants to party w/me to try it again. --Rainith 23:13, 15 June 2006 (CDT)

That sounds good to me; I thought he was a bit of a let down originally. It used to be somewhat anti-climactic to fight all the way to him and to take him out fast. Did you record if the skills he uses has changed? --- Barek (talk • contribs) - 00:28, 16 June 2006 (CDT)

Awesome. This is just what I have been waiting for. The previous 'equip a few running skills and anything that deals damage and run with one friend and kill him' Rotscale was lame. Now I'm going to have a lot of fun with this guy and his friends. (Is Anet listening to me? Just yesterday I was getting bored playing the game. Now they added something fresh and new for me to do.) --

Ok, 7 greens have been found. You would think that there are at least one new green for each profession, seems Warriors could get 3 or more (axe and hammer found, sword and shield still missing). As the items seem to drop from enemies of their respective profession, one would have to think, where could other possible spots be? I doubt low leveled monsters would drop such perfect items, so that narrows down the field of which to search. I was thinking Tears of the Fallen for Grand Drakes (Elementalists), Twin Serpent Lakes, or if mission only monsters counted, possibly Bloodstone Fen and its Jungle Guardians or Ravagers. Throwing some ideas out there to get people thinking. Happy hunting! --Gares Redstorm 14:03, 17 June 2006 (CDT)

I think that this update tried to persuade people to go explore distant areas. Therefor I would try searching in Dragon's Gullet and Mineral Springs. --

Well, we might be able to cross Dragon's Gullet off of the list. I just solo'd thru there and killed everything to no avail. Not 100% proof, as I have terrible luck getting greens (I have yet to even see a Canthan one drop), but I'm fairly certain there is nothing there. --Rainith 04:46, 18 June 2006 (CDT)

About time that area got something of interest. It's a shame, it has some very nice sceneries (like the falls themselves or the Balthazar temple) and probably about 95% of all players wouldn't ever bother going there, except maybe for doing Blood And Smoke. Well, that should've changed now. I haven't been in the game today yet, but I just know that Ventari's Refuge will be full with people saying "LFG falls farming" when I get there. :) Coming to think of it, now the only place left that still doesn't have anything to coax players there would be Anvil Rock. Somebody checked that out after the update? :) --84-175 (talk) 03:25, 16 June 2006 (CDT)

Magesty's Rest was even worse, there was no point in going there at all for any reason unless you wanted to run past the Kryta missions (Run to ToA then run from ToA to somewhere like Druid's Overlook). --Jamie 03:39, 16 June 2006 (CDT)

Yes, you're right. But then, if you'd run past the Kryta missions, why not go straight south to Sanctum Cay and skip the Jungle, too? That wouldn't even bring you past Majesty's Rest. :)
But wow, was I ever wrong, Ventari's Refuge is deserted! New greens and no farmers? What gives? Or are they all at Rotscale's? And that when they even gave us a parade 55er weapon with that Totem Axe. I'll for sure get one of them for my monk and another on for my mesmer (and maybe even one for my warrior). --84-175 (talk) 03:44, 16 June 2006 (CDT)

Considering the +5 energy is from an Insightful mod as opposed to an innate bonus, that might be why the farmers are not interested. A 15k axe from Divine Path is better as ppl can add an Insightful to get +10 energy total. -User:PanSola (talk to the

There were bus loads of people in Ventari's when I did it. I went three times, got me an axe the second time. I went 2 times with rainith got me the bow. Nice stuff. They are basically saying sorry for nerfing the HoD swords and driving their prices up the roof. I know "of" people who paid 400k for those HoD swords. Poor them. --Karlos 04:34, 16 June 2006 (CDT)

Are the Root Behemoths any stronger? I know I can solo from Ventari's Refuge to the end of the Falls and kill everything in my path, but if it's different I might have to think of a new game plan. --Gares Redstorm 08:28, 16 June 2006 (CDT)

They are very soloable with Wammos. Your biggest enemy is actually the Wind Riders. The biggest nagging issue with the Behemoths will be the Life Pods healing them. kKill the annoying little guys first (but they heal other). --Karlos 08:44, 16 June 2006 (CDT)

I only solo as W/Me. Life Pods are easy after a couple of hits, cause they lose all their energy with Holy Wrath. And Root Behemoths turn to melee when you get in their face, hence my use for Riposte. Wind Riders are the hardest part, but if there are a lot of them and you are patient, you can get some good hits in, bleed one, and sprint out if you get in trouble (Cry of Frustration everytime you try to use Healing Signet). Rinse and repeat. Just remember to all you Wikians, there are many picutres and SoCs not gotten yet in the Falls. ;) --Gares Redstorm 09:03, 16 June 2006 (CDT)

I can confirm this myself now. One just dropped for me after killing large numbers of these annoying little buggers. --

Stabber, you are fighting for making our text exact to that of anet, right after you are putting your assumptions into it? I would remove that guess. no reason to think that. not unlikely that we all have missed something. Foo 19:50, 16 June 2006 (CDT)

You know, I have been thinking about this since the update came out. Perhaps it is the 3rd dropped green by Drago Stoneherder finally introduced into the game. There has always been talk of an unknown bow and Drago is the only boss in that area to not drop 3 unique items. That's the only logical solution I can think of. --Gares Redstorm 13:54, 17 June 2006 (CDT)

Maby the bow has always existed as code, but the loot randomiser of Drago doesn't include the bow, so it doesn't drop? --

How about this: ANet update scribes aren't in touch with the game and made a mistake — Skuld

The best I can come up with is that the bow has always existed in the code. Someone mucked up the loot system for dear old Drago and it doesn't drop. My guess is the bow contains a Sundering stat, so when they brought all the old greens up to speed with the new greens, it showed up in their internal search and they boosted it, not knowing it doesn't drop anyway. Kessel 21:23, 17 June 2006 (CDT)