this was part of the new art style added in with the nightfall PvP preview event. --Honorable Sarah

Sorry but i dont know the date of the update, so i hope this title is correct enough for people to know what it concerns. Does anyone have any clue if the access for PvP guys to be able to fight in the luxon and kuzick fort and jade quarry is a peramant change, or if its just part of the weekend of fun? I know the double faction will stop on sunday night, but the way the patch message was written makes me wonder how long term this maybe. As i see it, its been a wonderful weekend being able to get fights at the fort almost constantly due to the higher number of players around, and also it will make people concider running a pve char. --Djsmiley2k 10:25, 20 August 2006 (CDT)

Visited to fort today @ 1:35pm (GMT) and the Priest and Faction Scribe are still there, also someone claiming to be a PvP player reported they still had access. So hopefully thats lot more running the fort, from both sides --Woonack

Kool, is there still no offical word on this yet then? --Woonack

Can anyone confirm this? Is it a Core thing or specific to Tyria/Cantha?

Ive just found a Longbow (Mountain Troll Farming) with the Feathered Skin and the name hasnt changed. Not sure whats happening with this. Stone Mort 05:17, 8 September 2006 (CDT)

Check out the Longbow article and look at the top picture. Is that the bow skin that dropped for you? -Gares 07:46, 8 September 2006 (CDT)

Yeah thats the one I got (I actually had 2 but now sold). I could farm more and get a screenshot if proof is required Stone Mort 10:56, 8 September 2006 (CDT)
Proof that feathered longbow has not changed name

notice the time in the bottom right hand corner and this time signature for authenticity Stone Mort 19:04, 8 September 2006 (CDT)

Ok then, lets just assume on good faith that he's telling the truth (what is there to be gained by lying?), then we have an update thats not in effect. I know the update didnt update retrospectively as my longbow with the feathered skin is still just called a Longbow. And what would be the point of faking the sig lol? yours was right after it and they were made in order and appeared in the Recent Changes (or history... it'll only be a couple down)... of which I'm not aware of a way to fake. arual 05:58, 9 September 2006 (CDT)

Im not calling him a liar, it just seemed a but funny pointing out things to proove himself.-Sefre 17:24, 9 September 2006 (CDT)

Yeah fair point. Although now its up to someone to find a Feather Longbow. Im pretty sure that if it did exist then someone would have created the page by now Stone Mort 05:55, 10 September 2006 (CDT)

That's what this is about, a note on an update page? O.o I can assure that if ANet changed a name, it would be on a much grander scale. Not just changing one skin on one type of bow. Here I was thinking Stone Mort thought he found a new skin not listed on wiki.
Furthermore, there is no reason this "feathered fiasco" should continue and especially no reason to suspect someone is lying or altering photoshop. People upload proof all the time. Even I still upload proof on occasion. What he was showing was the name hadn't been changed. Would you believe a person who reconstitutes what the game has always show us, or someone just passing by and decided to throw a note on an update page? -Gares 10:06, 10 September 2006 (CDT) 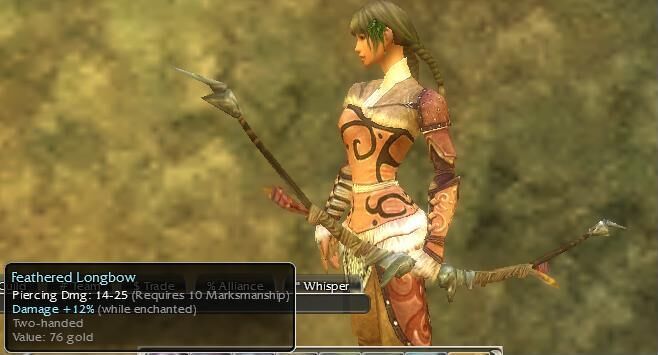 I also had a Feathered Longbow drop for me while farming mountain trolls outside Droks, can add a picture if needed. --Stylva 06:20, 15 September 2006 (CDT)

Is this difference in style noted anywhere in GuildWiki? Could a warning about this be added to the top of the patch notes on GuildWiki? Surreality 10:11, 14 September 2006 (CDT)

I have now found this difference mentioned at GuildWiki:Style_and_formatting/Skills#Skill_Progression, but I think a warning about this would still be a useful thing to have on the patch notes. Surreality 10:17, 14 September 2006 (CDT)

Ok, apparently I can be bothered. Looking at Game updates/2005_August and specifically Mantra of Recall on that date, they say the energy is changed to 13...28. According to the article as at 24 September the energy is 13...25, with 28 being the value at 15 points.

Really? My memory is really crapy then. Mking up stuff by itself. --

How about adding the following in the intro at the top of the Game updates template?

Be aware that patch notes are taken directly from the official Guild Wars site and do not conform to quite the same style as GuildWiki. In particular where a skill has a variable green number based on a linked attribute indicated in the style "1...10", in patch notes the second number is for an attribute value of 15 rather than 12, which is standard in Guildwiki according to the style guidelines.

Even with a great connection like cable you can't download the updates fast, because the Arenanet servers can't upload the data to the hundreds of thousands of players at the ame time at a great speed. The download speed seems to vary from really slow to pretty fast. --

Anyone know what was changed in the Sept 14th update resulting in downloads for just about every area in the game? Is it shader/texture related?

Probably streaming nightfall stuff? I just did the -images and went to do something else for like an hour or so. --Theonemephisto 19:51, 14 September 2006 (CDT)

How does one do the -images in one fell swoop? I'd like to know, as the internet connection at college isn't the fastest, and doing it while at class or something would be awesome. -Auron

Leaving GW on at the login screen shows a little streaming icon at the top right corner, if that's what you mean, and also shows a number of kb/mb downloaded. Foo 01:52, 15 September 2006 (CDT)
See command line. Start GW with the parameter "-image" and it'll download all the content you're missing. After it finishes it'll just close the window, not start the client, so don't leave it in your shortcut for GW if that's how you do it. --Fyren 02:08, 15 September 2006 (CDT)

-Image Screenshot There's a quick screenshot i setup of what the shortcut properties should look like to -image. hope it helps. --Midnight08

There will be graphical updates with NF to all areas. Possibly the files relate to new art and art updates. --Midnight08

Thanks for that link, Fyren. Some of those commands are really useful. -Auron

This has been changed very recently. Previously if you logged out of one character and logged in with another, the timer would start again. Now the timer keeps going regardless of how many times you swap characters.

Not noted anywhere (that I can tell) for some reason the halo effect that surrounds a character's body when enchanted no longer appears (at least for me). (Wait, don't tell me -- update my video card drivers? lol) --DaveBaggins 05:06, Sept 18 2006 (CST)

Didn't henchies always use to do emotes while standing around? I know Lina's a fan of /bored, and Eve tends to yawn.
~Seef II