In the Additional Notes there's a back way mentioned. I think I found it (beginning right behind the place where you find Oink), but it seems to be blocked by a tree and some woodwork now. Nevertheless reaching that tree involves fighting an awful lot of Hellhounds and their companions. Can anyone confirm that this back way is blocked or did I just miss the path? --Si Tacuisses 03:13, 23 November 2005 (UTC)

Not only that, but if you reach this point and your party members with ranged capability kill some of the baddies on the other side of the block - DO NOT attempt to retrieve any of the drops beyond the block. Evidently there is a bug that will allow you to get to the drop, and then you'll be "stuck" on the back side of the debris with no way out! Porscheracer 11:42, 12 September 2006 (CDT)

This has been fixed. The back way now leads onto the main mission path again. Though it's hardly worth it, have to go through so many undead. >< Entropy 20:04, 4 February 2007 (CST)

You would not believe how many people think of that area as their "secret farming area". They claim only themselves and those who they have told know about it. VegaObscura 06:16, 17 March 2007 (CDT)

Big Gate before Point A[]

I figured it out, all the nearby groups must be destroyed, then the gate automatically opens. --The King Tarosian 21:44, 16 August 2006 (CDT)

Oddly, you do not actually have to talk to Justicar Hablion at all (and perhaps not even Justicar Tomiko or whatever his name is, in town). As long as you clear out the Undead from the swamps at the end, the mission will be complete. Of course, it's hard for first time players to tackle so many undead at once, so it's not worth mentioning in the article really. The extra White Mantle help is often necessary. >< 24.6.147.36 19:18, 1 February 2007 (CST)

Strange Light in the Swamp[]

While clearing the swamp on this mission, I went for the boss, but two undead were remaining after he died. Weirdly enough, when i came out of the little room the boss is in, a strange, red light started to bounce around at the entrance. Has anyone ever seen this before while doing the mission? Here is a screenie of what the red light looked like: http://img442.imageshack.us/my.php?image=gw078sd1.jpg.--John Deathblade 20:34, 19 March 2007 (CDT)

Yes, that is a Will-O-Wisp. It's a neat graphical effect that ANet puts into some of the swampy areas, as well as an interesting real-world phenomenon.

You can see it all around the Kryta area, I think...like The Black Curtain, North Kryta Province, Kessex Peak, Sanctum Cay, um...other swamp places...I dunno about inside LA itself though.

Anyone else find it odd that a White Mantle Knight is thanking Dwayna for the luck of finding the scepter? Wouldn't the Unseen Ones be more appropriate? Dorian really needs to get started on that Mantle inquisition... --Valentein 09:58, 5 June 2007 (CDT)

It is just a saying. It is exactly like people saying "Thank God!!" whenever something happens that is good to a MicroSoft Vista computer instead of saying "Thank Bill!!" Just my opinion :P ~Pas2010 <3

The Map of the shoreline is clearly wrong. 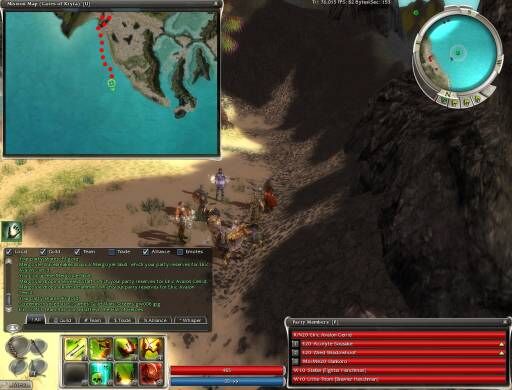 Kindly update my map. it is a bit different.

Besides, the long path will meet some level 18 monster, it is not suggested for beginer to use long path. short path is more safety. --User:syhor7 9.30pm 6 December 2007

The tips about Heart of Holy Flame and Judge's Insight are great, but why in the world does the Hard Mode walkthrough contain tips about keeping Justiciar Hablion alive? It is my opinion that talking to him should most definitely be avoided in the first place as you really don't need the help of the additional units. The mission and the bonus becomes ridiculously easy (and no, that isn't an exaggeration) to do if you have a good smiter monk in your party - just load him up on a choice of holy-damage-dealing smiting skills (Ray of Judgement would be my recommendation for elite) and you will have no problems. I just completed both using a hero/hench party with 3 monks (healer hero, smiter hero, hench monk) and all the mobs died on sight. --Johh 00:15, 5 February 2008 (UTC)

Even easier is to not talk to Hablion at all. After doing the bonus, go back the same way and cut across the water there. You never need to cross the big bridge south or fight the beach. Once on the other side, clear out the swamp, and you're done. No need to risk Hablion at all. I dont know how to upload or link images, but a quick attemtp to draw what i mean can be found here: Anyone ever notice this?

600/Smite can clear it, and maybe a modified 55 too. If you're quick you can aggro mobs before Hablion and he should survive.

So I was doing this in hard mode and screwed up the pull of the 2nd big cluster of mobs after Hablion. I flagged my h/h and ran for it but the team was wiped and I didn't have a rez on me. I ran back to Hablion hoping some of the white mantle would have rezzes but triggering the cut scene revived my party at his location. Is that standard for missions with cut scenes or was I just lucky here?--Alessar 03:18, September 3, 2009 (UTC)

I got 3 more groups of smoke phantoms after the group at the chest :)

That would be due to the massive cleanup I performed on the GMC guide back in March. The main thing I did was to consolidate the majority of the area-specific tips into general notes. I pruned this one in particular probably because I felt it was covered by the "Cooperative missions" notes under the Tyria section and didn't really need any "additional strategies" (if you scrape like you should, you'll find it). We can keep the note here, of course. —Dr Ishmael

In the mission, in the final cutscene the writing said, "You and your fellow Ascalons are welcome here". Ascalons not ascalonians. Needs to be clarified though. Flexi 17:59, October 15, 2010 (UTC)